[Updated Jan 2011] 1.4% Military pay raise in 2011 confirmed. The President and Congress have approved a 1.4% pay rise for our armed forces members (Navy, Marines, Army, Air Force, Coast Guard and National Guard) with additional compensation or incentives for service members to be made via one time special payments.

The initial 1.9% pay raise proposal was quashed in light of voter backlash on excessive government spending and ballooning federal deficits. The 1.9% raise would cost $1.4 billion, $377 million more than a 1.4% hike, according to the CBO. Shown below are the 2011 military pay tables from the Defense Finance and Accounting Service (DFAS) that are effective from January 1st 2011. The first table is for Military staff with less than 20 yrs experience. The second is for those with over 20 years experience. 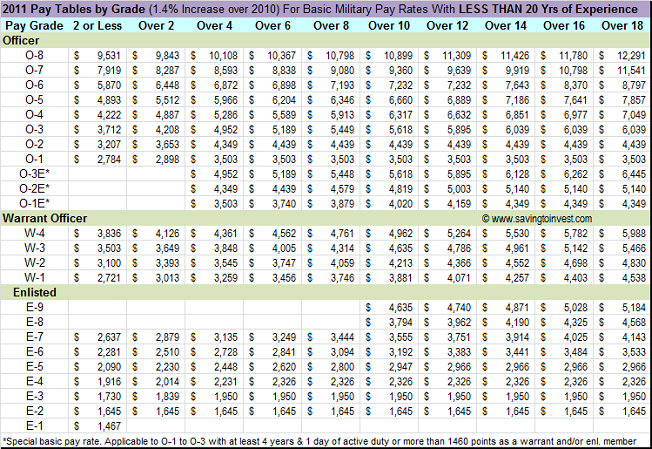 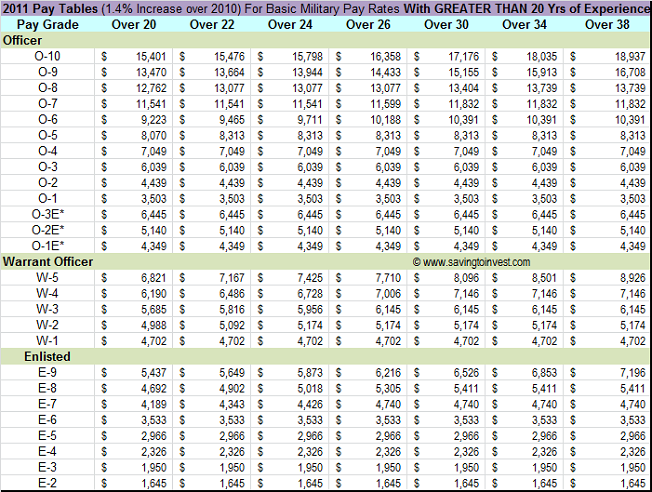 Notes for the above tables

Military basic pay is subject to federal income taxes, unless earned in a designated combat zone. Whether or not basic pay is subject to state income taxes depends on the laws of the state which the military member claims as his/her legal residence. Military Basic Pay is dependent upon pay grade (rank) and years of military service. For more pay details and allowances see this DFAS listing for 2010 rates and this one for 2011 rates

I will provide updates on proposed incentive and 2012 pay raise figures as soon as they are available and encourage you to subscribe (free) via Email or RSS to get notified of the latest updates and other money articles that could affect your finances.

[Update Oct 2010] 1.4% v s 1.9% Military Pay Rise in 2011? That’s the question in Congress, with both options of the 2011 military base pay raises being considered. The President has recommended an across the board increase of 1.4% in military base pay, but the House (via H.R. 5136) approved a raise of 1.9% (see update below) earlier this year. The Senate has not yet formally voted on the 2011 military pay legislation. But in a blow to the higher pay raise (1.9%) option for our armed forces members (Navy, Marines, Army, Air Force, Coast Guard and National Guard) the Senate Defense Appropriations Subcommittee has recommended the 1.4% pay rise option with additional compensation or incentives for service members to be made via one time special payments.

House members still remain committed to the 1.9%, but will soon have to reach some consensus with the Senate and President who only want a 1.4% pay rise as they look to cut government costs in light of voter backlash on excessive government spending and ballooning federal deficits. The 1.9% raise would cost $1.4 billion, $377 million more than a 1.4% hike, according to the CBO.  [SEE UPDATED TABLES IN LATEST UPDATE ABOVE]

[ Previous Update – Jul 2010] The Defense Finance and Accounting Service released their Congress approved 2010  military pay charts earlier this year, which reflected a 3.4% increase over 2009.  Military pay raises, which are linked to civilian pay raises, have been at least one half of a percent higher than the civilian pay raise each year, as measured by the Employment Cost Index (ECI), until 2006. Starting in 2007, pay raises are equal to the increase in the ECI. Pay raises may exceed these automatic levels if authorized by Congress.

On 28 May 2010, the House passed H.R. 5136, the National Defense Authorization Act for Fiscal Year 2011, that states, “Effective on January 1, 2011, the rates of monthly basic pay for members of the uniformed services are increased by 1.9 percent.”  This raise is 2 percent lower than the 2010 military pay increase and is the smallest increase since the draft ended in 1973.  It is still 0.5% higher than the President”s 1.4% 2011 pay rise proposal.  The bill is now in the Senate where the additional 0.5% will be a major point of contention. This practice of dual pay rise versions in Congress has been occurring since 1999 in an effort to bring the military’s pay more inline with that of the private sector.  The final increase is subject to change (and could increase) as it progresses through congress.