[Updated for 2012 Rates and Changes] The federal minimum wage rate in 2012 stays at $7.25, or $15,000 on an annualized basis. However 18 states and Washington, D.C., have raised rates above the federal level to keep up with increases in the cost of living (see graphic below). This helps state workers because if federal and states have different minimum wage rates, the higher rate applies.

[Updated Apr 2011] The Federal minimum wage rate was $7.25 in 2010 and 2011. With low inflation will probably only rise fractionally in 2012.  However, President Obama has advocated increasing the federal wage floor to over $8 per hour in 2012 and indexing future increases to the inflation rate. Over 35 million working Americans only get paid minimum wage, which means that the minimum wage rate has a broad impact and is closely watched by a large portion of workers and employers. For example in the retail and dining industry, employees only get paid minimum wage and rely on commission and tips to make ends meet. There is no set formula or timeline for calculating the minimum wage and is based on a variety of federal/state factors along with the prevailing inflation rates. 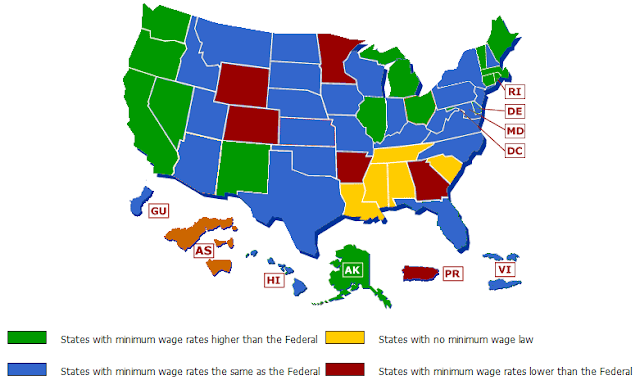 Some State Minimum Wages Set to Rise – Over 600,000 workers across the nation will be getting a pay rise in 2011 as their states adjust the state minimum wage following a cost of living adjustment. The following state minimum wages (already greater than federal levels) are set to rise between 9 cents and 12 cents on Jan 1st : Arizona, Colorado, Montana, Ohio, Oregon, Vermont and Washington.

Unfortunately workers in some states like Florida, Nevada and Missouri are unlikely to see a minimum wage increase in 2011 since the cost of living didn’t rise enough in 2010 to trigger a wage hike.

Source: US Department of Labor