[2012 returns and balances update] Fidelity Investments, the nation’s largest employer sponsored 401(k) administrator, recently published its 2012 statistics covering 20,200 401(k) plans with 12 million participants, showing that the average 401(k) balance was $75,900. This was the highest end-of-quarter average since the company it began tracking the data in 2000. It is up 18 percent  from $64,300 a year ago. The gains were driven by double digit increases over the last year in the S&P 500, boosting investment returns in 401(k)s.

Additional findings from the 401(k) data showed that more participants increased savings (deferral rates) than decreased it (4.6 percent vs. 2.8 percent). New participant deferral rates ranged from 3.7 percent to 8.4 percent, still well below the recommended average of 10 to 15 percent to secure a comfortable retirement. 401(k) participant contributions also continued to be allocated to more balanced and passive investments, such as target date funds (TDF). 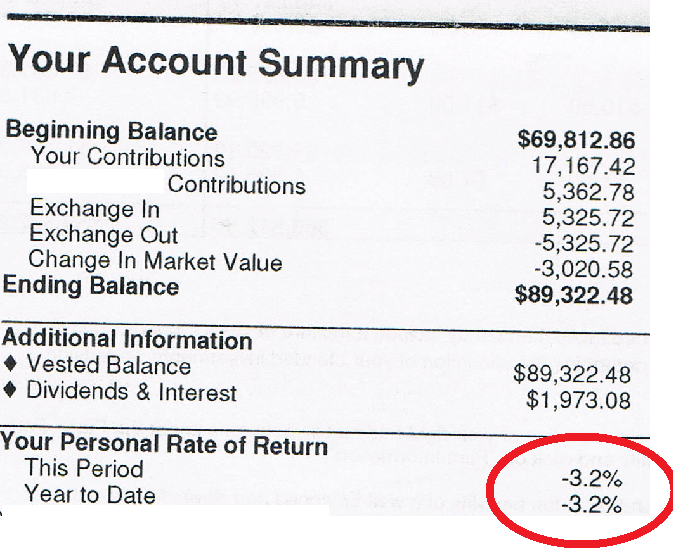 I recently received my 2011 401(k) performance statement and was disappointed to see a -3.2% performance for the year. This is especially the case after my 2010 return of 13.5%. Because my 401k is pretty diversified, the S&P 500 is a good proxy for the level of returns I should be getting. In 2011, the S&P 500 returned about 0.1% (Dow was up 5%). This means my 401k under-performed by -3.3%! Not terrible, but not so great either. I am in a target date fund, so cannot change things up too much, but if the relatively poor performance continues I may need to take a more active role in managing my retirement account.

Fidelity Investments, the nation’s biggest 401(k) administrator, says the average account balance was $69,100 in 2011, compared with $69,400 in 2010. The average slipped despite a slight increase in employee contributions (see maximum limits). The 11.6 million participants in Fidelity’s plans set aside an average $5,750 through paycheck deductions, up from $5,680 a year earlier. That’s more than 8 percent of their annual pay, on average. The amount that employers paid in matching contributions also rose slightly, averaging $3,270 last year. The increase came as more companies restored matches that had been reduced or suspended during the recession. Typically, about two-thirds of annual increases in 401(k) account balances are the result of workers’ added contributions and company matches.

But the balance boost that workers received from higher contributions was offset by factors including investment performance, and fees paid to manage the money and administer plans. The average 401(k) balance tracked the year’s bumpy market returns. At midyear, it reached $72,700, the highest since Fidelity began tracking balances in 1998. The average dropped 12 percent over the next three months, amid growing worries about the global economy and the European debt crisis. Those fears eased late in the year, sparking stocks to climb and boost the average account 8 percent in the fourth quarter.

Fidelity’s latest numbers demonstrate the value of a making saving a habit. Workers in Fidelity 401(k) plans who routinely set aside money from their paychecks with the same employer for at least 10 years had amassed an average $179,100 by the end of 2011. That’s nearly two-and-a-half times greater than the overall average for Fidelity’s 401(k) participants — including workers who haven’t been saving for a long time or discontinued contributions because of economic hardship or a switch to a new employer. (source : Detroit news)

I am willing to bet that unless you employed a very focus and active management strategy your retirement account returns will be highly correlated with the market. Of course retirement plans come in a lot of variety and mixes so it not always easy to gauge relative performance. But as a rule of thumb if your return is greater 7% in absolute terms or if you get 3% above market returns, you have done pretty well.

2012 has started off with a bang – the best returns since 1987 – with my portfolio up about 5% already. The S&P is up a similar amount, so not a bad start if I do say so myself. A number of analysts are predicting a good year with full year returns between 6-8% expected as the global economy recovers and corporations start hiring and spending more freely. So bottom line is to keep contributing as much as you can, while keeping an eye on how your retirement account performs relative to the rest of the market.