The Federal Reserve will soon allow banks with strong enough capital cushions to raise dividends, making them much more attractive to local and foreign investors. Only banks that satisfy new capital requirements from global regulators (Basel III) and domestic regulators (Dodd-Frank), will be able to raise dividends.  The potential for a significantly increase dividend payout  has already boosted the prices of some bank stock prices, and here is a list of banks that are likely to benefit the most from the easing of dividend restrictions:

While the banks were waiting for the green light to restore their payouts, other companies have been boosting dividends in recent months, making their shares more attractive, especially given the slow growth in the economy. Financials on average yielded 4.4% in 2008, making them one of the highest-yielding sectors, according to Standard & Poor’s. Now they yield 1.1%, making them the second-lowest yielding sector in the market. The six largest U.S. banks currently pay quarterly dividends totaling 51 cents, down from $2.49 in 2007. Bloomberg dividend forecasts show JP Morgan will quadruple its quarterly payout to 20 cents in February, while Wells Fargo will double its to 10 cents in April 2010.

JP Morgan and Chase (JPM),  Up almost 8% over the last week, this is strongest of the banks around and Chief Executive Jamie Dimon has already announced his intentions to start raising dividends from Q1 2011. He has said on many occasions that he did not even want TARP money, and he wants to pay dividends as soon as soon as the regulatory hold is released.  JPM’s current dividend is only $0.05 per quarter, compared $0.38 per quarter in 2008, though it may take a while to return to those levels. With EPS projections of over $4.50 in 2011 and a solid capital base, JPM is the pick of the bank stocks from both a dividend and capital growth perspective.

Bank of America (BAC) is the largest of the banks by deposits, and it too has signaled that it will look to increase dividend payouts; albeit at a lower-income payout ratio than historic levels.  The bank’s common stock now only pays $0.01 per quarter for a 0.33% annualized dividend yield, down from a high of $0.64 before the financial crisis hit.  Based on forecast earnings BAC could easily pay a dividend of up to  $0.12 per quarter, which is a dividend yield of 4% at current prices.

Wells Fargo & Co (WFC) will also likely return to dividend payments after Chief Financial Officer Howard Atkins, 59, said last month that an increase is a “top priority” for the bank.  The current dividend yield is only around 0.75%, down from a peak of about 4% before the financial meltdown and the Wachovia takeover. Analysts expect JPM and WFC to be the first of the mega-banks to raise dividends substantially in 2011.

Goldman Sachs (GS) and  Morgan Stanley (MS)– Amongst the first banks to pay off  TARP funds, both these bank holding companies that have no real bank are keen to return capital to investors and could easily triple current payouts to yield over 3% in 2011. With the strong M&A deal flow expected next year, these investment banks are poised to provide a solid combination of capital and dividend growth.

Other solid, safe and stable bank stocks worth considering that should pass the Fed tests to allow dividend payments are : US Bancorp (USB), State Street Corp (STT). and Bank of New York Mellon Corp (BNY). All these stocks could easily triple or quadruple their current dividend yields next year. If you don’t want to buy individual stocks then consider low cost Financial ETFs like XLF, UYG and KBE which hold a number of these quality banking stocks in their funds. 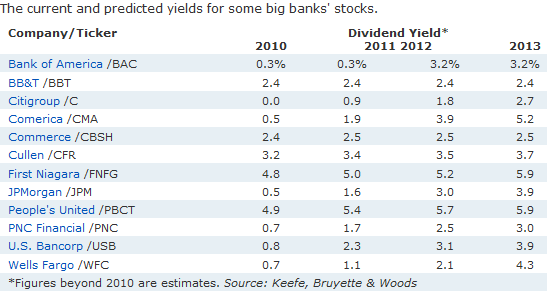 Allowing banks to beef up their dividends would offset a slow down of capital gains in a slow-growth macro environment, which is bound to lure investors back to high quality dividend paying bank shares. So if you do not have some of the above bank stocks in your stock portfolio, now is the time to starting adding them.