This article was last updated on July 14

The Finance Blog Network’s latest group writing project is about providing year end predictions on 5 key issues affecting all our financial futures. Given all the action this week and potential for a lot more change (damage) in the coming weeks, any prediction could be outdated as soon as it is written. But my guess is as good as anyone’s, so here goes:

Who Will Win The Presidential Election?

The election, which should never have been this close, should still see Barack Obama elected as America’s next President. I think the nation’s economic woes will get him over the line as Americans look for a change. This is the first election I am voting in and would classify myself as an independent at this stage. Before making up my mind, I want to see some more substantive arguments/positions from the candidates. I like some of John McCain’s ideas and his experience is a positive, but the thought that Sarah Palin could realistically become the next president by default (John McCain is no spring chicken and has had years of medical problems including recurring cancer) is a bit disconcerting for me, especially given the fact that the US needs the rest of world’s help (and hence their approval) to get through the global economic crisis we are experiencing. In any event, the next administration definitely has their work cut out in trying to restore our economy and housing market.

What About The Unemployment Rate? 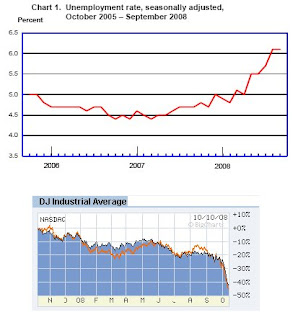 This will be the killer blow that officially puts America into a recession. As companies try to shore up their balance sheets they will drastically reduce budgets, cut costs and layoff employees. Also, folks will delay their retirement’s because they cannot afford to, thanks to falls in their retirement plans and home equity. I think unemployment will finish at about 6.5% by year end (currently 6.1%), with new college graduates and retail workers to suffer the most in the new year as jobs become hard to come by. It could go to 7% by mid next year, if current conditions persist.

How Will The Dow Fare?

Badly. If I had made this prediction earlier this week, I would have picked a different number to what I am about to say now. As I write this the Dow continues its free fall and stands around 8100, lows it has not touched in over 5 years. My year end prediction is for continued volatility with mini bounces along the way until a late stage holiday rally pushes the Dow to 9000 by year end.

Will The Bailout Package Be Effective?

The effectiveness of the bailout package, or rescue plan as it is now known as, will be entirely dependent on how it is executed by the firms that the treasury hires to manage the asset purchase programs. As an idea it has already been discounted by the markets given the sharp falls and continued lack of confidence. Overall, I am not a big fan of the bailout plan as it seems to be following the old adage of socializing the losses but privatizing the gains (for Wall Street). It may help stabilize certain parts of the housing market over the next year, but from a year end perspective it will have minimal impact because it won’t even be up and running till December .

What Will Happen To The Dollar?

As I wrote earlier this week, The US dollar is currently rallying/strengthening because of its perception as a safe-haven currency. With predictions of a severe global recession in 2009, investors and financial institutions across the world are reversing positions out of the euro and emerging market currencies that had been financed by shorting the U.S. dollar. This trend should continue for the remainder to the year with the US dollar gaining slight;y against the Euro and British Pound, but more strongly against the resource driven currencies like the Australian and Canadian dollars. However longer term, with our national debt passing $10 Trillion, the US dollar is going to fall as interest payments to foreign banks come due. Further, I think other governments and large institutions will be wary of investing so heavily in the US and our broken financial system, which will be result in a profound longer term shift of the world’s money centers to Asia and Europe. Year end prediction: US dollar stronger by 5% across major currencies.

Graphic : US Department of Labor, WSJ

$300 Per Child Monthly Checks – When and How Will the IRS make the First Child Tax Credit (CTC) Stimulus Payments in 2021?

I Finally Got My Tax Refund in My Bank Account