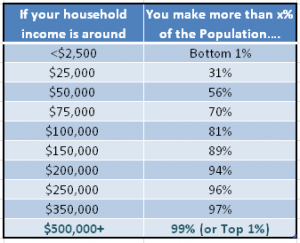 The table to the right shows where your household stands, relative to others, based on how much income is earned per year. For example, if your household makes $50,000 a year you would be making more than 56% of American households. At $100,000, you make more than 81% of Americans. To be in the 99% percentile, or in the “1%” as the media likes to call it, your household needs to be earning more than $500,000 annually. On the other hand, earning less than $2,500 a year puts you in the bottom 1%.

An important distinction to note with the figures is that they reflect household income not personal earnings. So if a household has 2 or 3 people making over $50,000 it then puts their household income at $150,000 or in the 89th percentile. Even though. individually at $50,000, they make around the average median income. On an individual basis you need to make more than $388,000 to be among the top 1% of earners, according to the most recent IRS income data.

Now I know people will protest and say, income does not equal wealth. I agree. Income is just one measure of financial success and by itself it does not capture the entire picture. For example how does someone earning say $100,000 a year, but living in a house ‘underwater’, with car payments, etc and virtually no savings compare with another having a $50,000 per year income but owning their home outright, owning their car outright and with a ton of savings in their retirement and savings accounts?

If fact, among the two primary measures of financial well being, income and net worth, the latter is by far the most important. As the old saying goes it’s not how much you make, it’s how much have. So rather than get fixated with percentages and what you make relative to others, spend the energy and time trying to improve yourself, educating yourself, and working smarter. You will probably then end up making enough to comfortably support yourself, your family and even increase your chances of moving up the wealth ladder.

6 thoughts on “How Rich Am I Relative To Others”