This article was last updated on May 18

The NY Times ran a piece recently claiming that the rich are not getting richer anymore due to some data they managed to dig up on falling dividends and a couple of sad rich people stories. I must say I was surprised by this one sided piece of reporting from the times which I regard as having some of the best and most objective writers (I even shell out $5 for their weekend editions!). Here’s some of the arguments being made in the article, which I strongly question. What do you think?

Economists say — and data is beginning to show — that a significant change may in fact be under way. The rich, as a group, are no longer getting richer. Over the last two years, they have become poorer. And many may not return to their old levels of wealth and income anytime soon. Bill Gates, Warren E. Buffett, the heirs to the Wal-Mart Stores fortune and the founders of Google each lost billions last year, according to Forbes magazine. In one stark example, John McAfee, an entrepreneur who founded the antivirus software company that bears his name, is now worth about $4 million, from a peak of more than $100 million. Mr. McAfee will soon auction off his last big property because he needs cash to pay his bills after having been caught off guard by the simultaneous crash in real estate and stocks.

“History told me that you jus 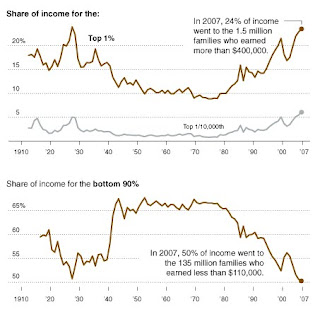 t keep working, and it is easy to make more money,” Mr McAfee said, sitting in the kitchen of his adobe-style house in the southwest corner of New Mexico. With low tax rates, he added, the rich could keep much of what they made. Over the last several years, Mr. McAfee began to put a large chunk of his fortune into real estate, often in remote locations. He bought the house in New Mexico as a playground for himself and fellow aerotrekkers, people who fly unlicensed, open-cockpit planes. On a 157-acre spread, he built a general store, a 35-seat movie theater and a cafe, and he bought vintage cars for his visitors to use. In 2007, Mr. McAfee sold a 10,000-square-foot home in Colorado with a view of Pike’s Peak. He had spent $25 million to buy the property and build the house. He received $5.7 million for it. When Lehman collapsed last fall, its bonds became virtually worthless. Mr. McAfee’s stock investments cost him millions more. One day, he realized, as he said, “Whoa, my cash is gone.” His remaining net worth of about $4 million makes him vastly wealthier than most Americans, of course. But he has nonetheless found himself needing cash and desperately trying to reduce his monthly expenses. [Do you really feel sorry for him? I think not]

Income inequality is still very real and despite a two year blip, thirty years of data cannot be disregarded. In fact, while the rich may be getting less rich, the middle class – the biggest chunk of American consumers – are feeling the biggest brunt of all the economic changes. They are normally making too much money to qualify for the stimulus payments yet are struggling with the specter of rising unemployment and inflation. This is evidenced by the fact that unless a middle class family has multiple sources or income (two or more jobs, a side business or help from family) living pay check to pay check or living in debt, they cannot lead a comfortable and financially stable life.

The article goes on argue that any major shift in the financial status of the rich could have big implications. A drop in their income and wealth would complicate life for elite universities, museums and other institutions that received lavish donations in recent decades. Governments – federal and state – could struggle, too, because they rely heavily on the taxes paid by the affluent.

Really? These rich are the same people that pay millions to their accountants to hide their money overseas and not pay taxes (unlike the rest of us). Case in point was the recent controversy between the IRS and Swiss Bank – UBS, regarding releasing bank details for their wealthy US customers who use these accounts to hide their millions via various offshore holdings.

It’s easy to use the trickle down effect of wealth creation, but the reality is that while the rich lose more money in absolute terms during down turns, they gain far more when things turn, with middle class America left further back. In fact, while many Americans have just seen some recovery in their retirement accounts, many of the rich have made ton’s of money through the short selling of shares and access to investments (think clients of Goldman Sachs) that few us will ever have.

Given that these super rich make up less than a few percent of the general population, the focus of government should not be on bailing them out (as was done in the financial crisis) but rather looking at a way to provide jobs and a quality of life for the vast majority of Americans. I am not advocating a socialist state and believe that hard work and entrepreneurialism should be rewarded – but let’s not feel too sorry for the rich. At least they still have a few million to drown their sorrows with.

Related
~ Are IOUs Coming to My State Replacing Real Money and Benefits?
~ No Second or New Economic Stimulus Package in 2009. But More than Likely in 2010 or 2011.
~ $1 Trillion Revised Bank Bailout & Housing Rescue Plan

$300 Per Child Monthly Checks – When and How Will the IRS make the First Child Tax Credit (CTC) Stimulus Payments in 2021?

I Finally Got My Tax Refund in My Bank Account