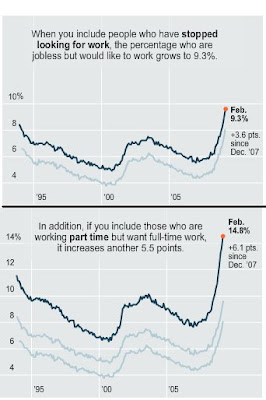 The Bureau of Labor Statistics released the latest unemployment report showing that the US economy has now lost at least 650,000 jobs for three consecutive months, the worst decline in percentage terms over that length of time since 1975. The rise in the unemployment rate from 7.6% to 8.1% translates to an estimated 12.5 million jobless Americans. However, this rate may be even higher in real terms. As shown in the NY times graphic on the left, the real unemployment rate may in fact be closer to 15% when factoring in participation rates and part-time workers who want to work full time.

The picture is even more grim in rural parts of America, worst hit by the recession, where base unemployment rates are well into the teens. At this rate we will rapidly move from a recession to a depression, which may last a lot longer than I thought. The stock market, which is a forward looking indicator, also fell to record lows – suggesting more pain ahead. The continued falls in the stock market have at least validated my decision to temporarily lower my 401K contributions and move to a much more defensive position.

My articles this week on the FDIC going broke and Dow Panic stations, reflected my overall pessimism and it seems that the Obama administration is going from a position of inspiring change to looking like they really don’t know what to do. It is looking more and more like the US government, despite throwing every last dollar at the problem, is helpless to stop the tsunami of bad economic news. Time – with a significant erosion of wealth – is the only thing that will end these dark days. Until then, hang on.

Related:
~ 5 Clear Signs your Job is in Danger (and 5 things to do)
~ Obama’s 2010 – $3.6 Trillion – Budget and My Money from Taxes to Health Care
~ Your Work, Home and Auto Tax Breaks in the 2009 Economic Stimulus Package
~ American Employees: Cheap to Fire