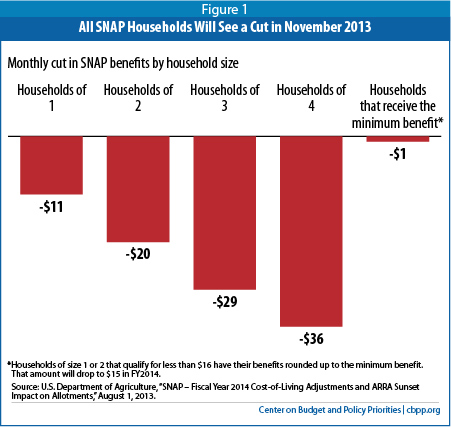 [Updated November 2013]  Without an extension to the 2009 stimulus funding for the Food Stamp/SNAP program, millions of Americans who rely on this program are going to see a cut in their benefits. The overall cut to the the program is around $5 billon dollars with the CBPP estimating the average cut will be $36 per month for a family of four. This may not seem a lot, but with families relying on every dollar to meet basic needs this cut can have a significant impact.

[Updated July 16th]  The Republican controlled house has passed a farm bill (216-208) without the SNAP (food stamp) program. No Democrats support the bill and it was the first time food stamps had not been a part of the farm bill since 1973. The Senate, controlled by the Democrats, have said they would not pass the pared down farm bill.

The SNAP program, which makes up 80% of the farm bill costs, will be passed in a separate bill according to Republican leaders. The lack of agreement between House and Senate leaders means a lot more acrimony and delays in getting any legislation passed before the August recess.

Millions of Americans who rely on Food stamp payments, provided under the Supplemental Nutrition Assistance Program (SNAP), could be in limbo after September 30th if the House and Senate cannot reconcile funding provisions in their respective versions of the farm bill. Overall, the House and Senate farm bills are very similar in how they deal with other subsidies, aid, research funding, rural development and conservation programs. But the biggest contention is around the SNAP/Food stamp program, that 47 million low income Americans rely on, and makes up more than 80 percent of the spending in the nearly $1 trillion farm bill. The House farm bill seeks to cut the SNAP program funding by $20.5 billion over 10 years through limiting eligibility and qualification rules. The Republican supported House bill is looking for $16 billion more in cuts than agreed to in the farm bill that passed the Democrat controlled Senate.

The Senate farm bill (S. 954), which finances programs as diverse as crop insurance, nutrition assistance for low-income families, agricultural research and foreign food aid, passed with bipartisan support, 66 to 27. It would cut $24 billion from current spending levels, including about $4.1 billion from food stamps over the next 10 years. The House version of the farm bill (H.R. 1947) was defeated by conservatives who wanted deeper cuts on food stamps and nutrition programs and Democrats who opposed both the cuts to those food stamp programs and a GOP-backed amendment that added new work requirements for those applying for assistance. Both parties are blaming each other for the failure in passing the House version of the farm bill with Senate leaders saying they will not pass another temporary farm bill extension. All this political posturing just reflects the grid locked state of Congress when it comes to any major legislation.

To try and secure passage of some key provisions in the bill before the August recess, House leaders plan to split the farm bill so that the SNAP program is considered differently to the other farm subsidies and benefits that are more aligned in the current bills. Removing food stamps and other nutrition programs from the farm bill may enable Republican leaders to gain back support to pass parts of the farm bill. But the Senate has indicated they are not going to support this idea which makes the split bill unlikely to pass.