This article was last updated on January 31

Apparently it takes 100,000 visitors a month on average to make $75,000 a year from blogging ($6,250 p/month)! Not so sure how realistic this is based on a piece I wrote about how much bloggers make, but I would put the number more at $20,000 or less per year for that number of visitors. Still not bad by any means and if you have the characteristics required for successful blogging, it can provide a nice source of side, part time or full time income. I even listed it as one of 10 ways to make cash quickly and a WSJ article by Mark Penn just confirmed that blogging as a profession and source of income is one of the fastest growing segments: (See my own revenue stats and chart at the end of the article)

We are a nation of over 20 million bloggers, with 1.7 million profiting from the work, and 452,000 of those using blogging as their primary source of income. There are almost as many people making their living as bloggers as there are lawyers. Already more Americans are making their primary income from posting their opinions than Americans working as computer programmers or firefighters. Paid bloggers fit just about every definition of a microtrend: Their ranks have grown dramatically over the years, blogging is an important social and cultural movement that people care passionately about, and the number of people doing it for at least some income is approaching 1% of American adults. That’s almost 2 million Americans getting paid by the word, the post, or the click – whether on their site or someone else’s.

Demographically, bloggers are extremely well educated: three out of every four are college graduates. Most are white males reporting above-average incomes. One out of three young people reports blogging, but bloggers who do it for a living successfully are only 2% of bloggers overall. It takes [over] 100,000 unique visitors a month to generate an income of $75,000 a year. [ I think this number is far too high, or I am not monetizing my blog well enough!]. Professional Bloggers who work for companies are typically paid $45,000 to $90,000 a year for their blogging. One percent make over $200,000. And they report long hours – 50 to 60 hours a week. Almost no blogging is by subscription; rather, it owes it economic model to on-line advertising. Bloggers make money if their consumers click the ads on their sites.

It is hard to think of another job category that has grown so quickly and become such a force in society without having any tests, degrees, or regulation of virtually any kind. Courses on blogging are now cropping up, and we can’t be far away from the Columbia School of Bloggerism. There is a lot of interest now in Twitter-ing and Facebook-ing – but those venues don’t offer the career opportunities of blogging. Not since eBay opened its doors have so many been able to sit at their computer screens and make some money, or even make a whole living. 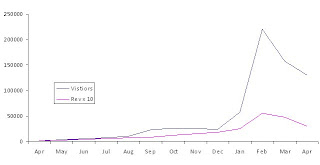 While it is great to see blogging go mainstream, it does mean a lot more competition and only the very best blogs will make serious money and attract new subscribers as the market reaches saturation. Personally, it has been a great ride and the revenue has far exceeded my targets. As I stated in my about page, I surpassed my original end of year targets within the first 3 months of this year, and have since readjusted those targets. But I think I may be getting back to a more normal pattern as I have seen my traffic and revenue growth slow, after a sharp rise earlier this year. However, I see this as healthy and overall if I can generate my target income range I will be more than happy. One thing I have come to realize is that while blogging may have started as fun or a hobby, you must start to treat it as a real business if you want to consistently make money from it and like any business it takes time to grow and effort to sustain.

See more on this topic:
~ Google’s Earnings, Adsense and Credit Cards
~ Page Rank – What’s it worth to you?
~ The week that was: Luxury in the Sky and Around the Blogosphere
~ Looking Past the Subscriber Count

I Finally Got Paid and Got My Tax Refund

How Many Weeks of Benefits in the Latest Unemployment Extension Stimulus – 29 or 25?