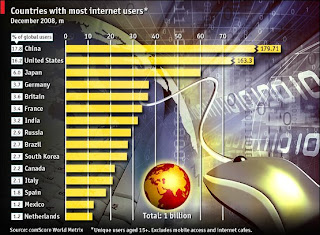 The internet and it’s evolution is synonymous with the leadership in American technology. However, like every thing else, the world is catching up and over taking the US. One clear example of this is internet usage, which is now the highest in China as shown in the graphic from a recent Economist article. Now, China’s population is three times that of the US, so it was only matter of time before internet usage there surpassed us over here. Eventually, India will also jump higher than the US. I say all this not in a negative context, but as a reality that we should embrace. The internet is the world’s truly democratic information highway and the more ubiquitous it is, the better it is for all people – especially those who do business online. The key is embracing this new trend, rather than to fight it.

Almost 180m internet users—over one in six of the world’s online population—live in China, more than any other country. Until a few months ago America had most web users, but with 163m people online, or over half of its total population, it has reached saturation point. More populous countries such as China, Brazil and India have many more potential users and will eventually overtake those western countries with already high penetration rates

Take this blog as an example. It is now more than a year old and it is has been interesting to note the changing geographical composition of visitors to my blog. While still predominantly US based (80%), I have noticed a steady increase of international visitors (20%) and subscribers. I have mainly directed my marketing efforts at US based consumers, but the shifting trend in Internet usage is making me rethink how I position articles and information I present here. Yes, currencies and terminology may differ – but the basics of personal finance – saving, investing and budgeting tend to be similar world over. What’s more, a lot of foreign visitors are interested in the US economy (given its importance) so by providing some local context I can definitely attract more international visitors to my bog, which should hopefully translate to more ad revenue and subscribers.

Despite China overtaking the US in internet usage, the average US internet transaction is still more than 20 times that of a similar one in China, and triple that of any other western nation. I attribute this to the culture in America where buying things or doing business online is part of everyday life, whereas in most other countries transacting or buying anything more than a few hundred dollars online is approached with trepidation. This behavior is also likely due to the consumer protections and (perceived) stronger security measures in America.

However in time as the world adopts e-commerce at a consumer level the “value” of a transaction is likely to increase overseas much faster than it will locally. Which means that you need to ensure your online business model factors in this new audience and potential revenue source. In time, I have a feeling that the most successful online businesses (and blogs) will be the ones that appeal to a global audience and not just a local one.

Related:
~ Setting a Good Online Password
~ Google’s Revenge
~ The Carnival of Personal Finance #184: From the Land Down Under
~ Characteristics required for successful blogging