As a part time MBA student, with a single income and young family, I am particularly sensitive to rising education costs. So I was dismayed to see that my university’s (already expen 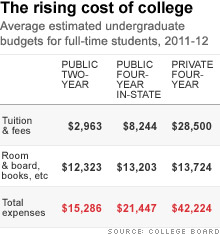 sive) tuition costs were again rising. This is the third year in a row and my degree will end up costing roughly 10% more than what it was quoted when I enrolled! The tuition increase is almost 100% higher than the average increase in inflation. This though is in line with the general rule of thumb that tuition rates will increase at about twice the general inflation rate.

The above note from our associate dean of student services prompted me to research how my school’s increase compared across the tertiary education space. The college board released a recent study that showed that 2011-12 tuition rates at the average public university jumped 8.3% to $8,244. This is higher than the rise over the past decade, where tuition and fees for in-state students at public colleges increased an average of 5.6% a year above inflation.

Based on my other online research, the 5% increase I saw for my program is actually in line with what other schools have enacted. Unfortunately with further federal and state education subsidy cuts it looks like tuition rates are set to continue rising.

Finally, another impact of higher education costs, particularly for graduate students who put off working to study, are the opportunity costs. While the tangible costs of college are tuition and fees, you are also paying the opportunity cost of time away from work (and family)– that is, if one were not in college, what productive activity could one be doing instead? If I didn’t have to pay education costs, I could invest that tuition money or even take a second job for example.

Have education costs risen in your college or university? By How Much?