According to a recent report from the Deloitte Center for Financial Services, the total number of US families with a net worth of over $1 million will double by 2020. All this while the unemployment rate hovers around 10% amidst a tight job market undergoing significant structural reform. 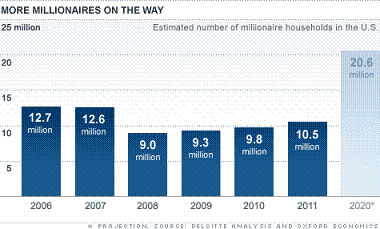 Overall, the U.S. and Europe have the greatest concentrations of wealth than any other region, although emerging markets are narrowing the gap. China will lead the way in millionaire growth, the report said, followed by Brazil and Russia. With 10.5 million, the U.S. has – by far – the greatest number of millionaire households in the world, despite the financial crisis and ensuing recession which knocked more than 3 million millionaire families off the map between 2006 and 2008. (source : CNN)

With most of America focused on making ends meet by working longer, working more and spending less time with family and friends, the rich become uber-rich. That’s the dark side of capitalism for you. However, rather than look at the above news in dismay, consider the upside. You could be one of the people that are in the “doubling” of millionaires. As Thursday Bram pointed out in a related article:

With millions unemployed and even more people underemployed, it’s easy enough to say that statistically a person will never jump that gap. That’s only true if you let it be, though. The real picture is that most people don’t push that hard to move forward. Sure, there are certain parts of the population who face disadvantages, but there are enough millionaires who grew up in trailers or never finished high school or went through hardships that we can still see plenty of class mobility in this country. If your main priority is making a million dollars, it certainly can be done. Do you want it to happen badly enough?

How does one become a millionaire? Most get there by taking one of the following options:

Start your own business – Most multi-millionaires are their own boss and starting your own business (and ideally selling it a few years later) is the most likely way you will become rich. This path to wealth is also the hardest and most riskiest as 7 out of 10 business’ fail in their first five years. But if you have an entrepreneurial spirit and are willing to work hard on a business you believe in, then you have more of a chance than most to succeed and join the ranks of the rich.

Change career paths – America is undergoing a massive structural shift in the types of jobs available and unless you are on the right career path it is unlikely you will ever be able to truly escape the rat-race, even if you work like a dog for the next 30 years. For students, this means choosing a degree that can get you into growing professions that reward you for your hard work and intelligence. And for those already working it may mean making a shift via re-training or taking entry level jobs in growth industries or firms. Changing career paths is also a good option to consider if you want to start a business in a field or franchise you are not familiar with.

Educate yourself further – Even if you are in the right industry, climbing the corporate ladder towards a senior position is the only way of making some real money. This is primarily because you can finally get access to some serious stock options and bonuses. Working hard is a given, but getting better educated can give you the edge over your colleagues competing for the few senior management positions on offer. In particular, graduate degrees like an MBA or Masters in your field of expertise can give you that edge that gets you a coveted promotion and a higher income. An added benefit of an MBA is also the alumni networks you build that can get you better jobs or access to potential business opportunities.

Invest smarter – This is something that everyone can do and while it is the longest path to riches, it is also the surest because you can use the power of time and compounding to grow your wealth. Investing smarter includes thinking long term and be willing to take risks when others aren’t. It is no secret that smart, long term investing works. Just ask Warren Buffet.

The above is not a mutually exclusive or exhaustive list – but it has the more realistic options. After all winning the lottery or getting a big inheritance can also make you very rich, but is not really a viable option for most.

Feel free to suggest or elaborate on any ideas on how one can make it to the millionaire list by 2020 in the comments section below.