Gold futures surged to $1,013 an ounce last week, the highest closing price on record and the first above $1,000 since February. The advance resulted in another weekly gain with 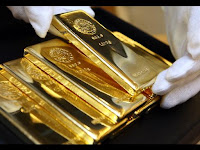 gold prices having climbed for four straight weeks. SPDR Gold Shares (GLD), a huge ETF that holds more gold than many nations have in their reserves, has seen its assets climb toward $35 billion, just shy of a record set in June. Many market watchers and stock analysts are still bullish on this most precious of metals, but there is divided consensus on what is driving the price so high. Here are the three factors that could be contributing to the current and potential future rise in gold prices (and why you should consider it for your investment portfolio):

As discussed in this article, the US dollar is buckling under the pressure of a huge national deficit triggered by the multiple wars this decade, a great depression-like-recession and a strengthening global economy that is taking foreign capital away from US assets. The U.S. Dollar Index, a six-currency gauge of the greenback’s value, has dropped for six consecutive sessions, the longest slump since March, to an 11-month low. Gold, which tends to gain when the dollar weakens, has climbed 14 percent in 2009. Here’s what some analysts are saying:

“The dollar is going down because of inflation fears” and that pushes gold up, said Leonard Kaplan in a Bloomberg interview, the president of Prospector Asset Management in Evanston, Illinois, and a bullion trader for more than three decades. “There is too much money and everything is going up. It’s not about supply and demand, it’s not about common sense.”

The continued weakness in the dollar gave the bulls incentive to push this higher,” Miguel Perez-Santalla, a Heraeus Precious Metals Management sales vice president in New York, said by e-mail. “It made new highs but once the dollar went back below 1.46 euros, it lost $4. All eyes are on the dollar at this moment for some guidance.”

The further the dollar falls the more likely it is that investors will accumulate gold and other commodities.

With the fading fortunes of the US dollar and large reserves of cash on the sidelines, many investors – especially hedge funds – are using gold as a speculative play against the falling greenback to reap handsome rewards. Despite technical charts and many market observers saying gold is overbought and overpriced, speculators keep pushing the price up every week.

Another speculative driver is the seasonal trend in gold which investors try and leverage every year. Buying gold during the so-called summer doldrums has been a “winning trade for most of the last 34 years and especially in the last seven years, averaging a gain of nearly 13% in just six months after the summer low.” The reason: Indian and Asian gold demand is strongest in the autumn months due to the harvest, festival and wedding seasons. Added to that, investment players come back from summer vacation and western-holiday-jewelry demand kicks in late in the year for Thanksgiving, Christmas and Chinese New Year.

So positive factors pointing to a rise in gold prices range from seasonality to capital seeking refuge from paper currency devaluations, said Peter Spina, an analyst at GoldSeek.com. And with the next round of this economic downturn starting, capital will have limited choices to take refuge in – prompting gold and silver to lay claim as benefactors, he said.

From a fundamental perspective, gold prices tend to rise during bad economic times and/or when inflation is rampant. Neither of these conditions currently holds, and with the local and global economy showing signs of growth, it is almost impossible to attribute the sudden surge in gold prices to any underlying near-term fundamental drivers. However in the medium to long term (5 to 10 years), gold’s gains may in fact have a fundamental basis for rising given concerns over rising inflation, driven by huge injections of cash from the all economic stimulus programs.

Longer term, gold prices also have support from a supply/demand perspective. From about 2001, gold production has been declining. The reasons behind this are that it’s getting harder and harder to find good gold deposits at prices which it is economically feasible to extract the metal. Basic economics tells us that as supply decreases and demand grows, prices should increase as companies seek to maximize profits. However, that hadn’t happened, until the last 3 months. So the current price rises could be beginning of a real trend rather than just a late summer rally.

Gold managed to trade at levels not seen in more than a year, but it’ll need quite a bit more than a friendly boost to gain a good foothold, retain its spot and climb to fresh record highs. Whatever your perspective thought, investing in gold may not be a bad diversification play for the rest of your portfolio. Particularly if it is a US dollar sensitive portfolio, e.g. companies whose profits are linked to a strong US dollar). For ways on how to invest in gold see this detailed article which looks at the multiple ways to invest in this precious commodity.

~ How to Invest in the Stock Market via Stocks, ETFs and Mutual Funds
~ The Beginning of the End for the Mighty US Dollar
~ Working and Living in Dubai – Is all that glitters gold
~ Oil’s temporary respite
~ 5 Steps to Take Now in Preparation for Double Digit Inflation