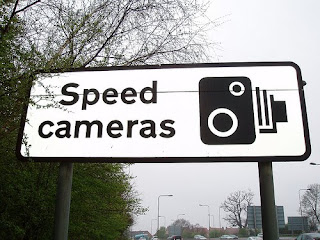 Doh! I just received a speeding ticket in the mail after getting booked by an automated speeding camera while driving through Maryland a couple of weeks ago. After doing some research on automated speeding cameras I found that more and more states (90%) are using fixed speeding camera’s because they are much cheaper (than a real officer) and a huge revenue raiser because they operate 24×7. Unfortunately there is little chance for me to get out of paying the ticket (it would cost more to go to court in Maryland) and almost impossible to dispute the radar’s/camera’s reliability and accuracy.

Speed Camera’s are electronic devices operated by police to enforce speed limits. Speed cameras, also known as photo radar, monitor the speeds of passing vehicles and are programmed to photograph vehicles traveling a set amount above the speed limit. Unlike other methods of traffic law enforcement, speed cameras do not require offending motorists to be pulled over. There are two methods for deploying speed cameras. Mobile speed cameras are accompanied by police and moved around among various locations; fixed cameras are unaccompanied and photograph vehicles speeding at specific roadway locations. The speeding camera vehicles use radar to track driver speeds and are capable of scanning multiple lanes of the highway at once.

Another thing to note is that if you are the owner of the car, you get the ticket no matter who is driving. The tickets go to the owner of the vehicle instead of the driver, unlike regular speeding tickets manually issued by an officer. Many citizens have complained about this “flaw” in ticket camera systems across the country, but local authorities have decided that it’s acceptable to do this to avoid the hassle of tracking down the actual violators. So think twice before lending your car to friends and family who have a penchant for fast driving.

There are however numerous websites that do provide tips on how to beat speeding camera tickets. Some that could possibly work include :

– Blurry or unclear photo of the driver is the one which gets the most cases dismissed. However some states allow a photo of the license plate to establish that your car was speeding – which makes it harder to use the bad picture excuse.

– States that use automated (fixed) speeding camera’s must post warning signs at each camera-equipped intersection and “visible to traffic approaching from all directions,” or at all the main entrances to town “including, at a minimum, freeways, bridges, and state highway routes.” As noted on HighwayRobbery.net, most cities elect to post the intersections rather than the town entrances, and occasionally some forget to post all four directions at the intersection, especially when they have just made a new camera installation. There must be four signs even if there is only one camera monitoring one direction of traffic. This technicality may get you off paying the speeding ticket, but surveying the area for signs could take quite a bit of effort.

– Heavy Traffic. Though speeding cameras can scan multiple cars across multiple lanes, the older model ones do sometimes have limitations which could be used to argue one’s way out of a ticket. However the only cases I read about that could use this old model excuse was if their or nearby car’s were changing lanes (so had to accelerate), which may cause the older model camera’s to mix up cars.

– The funniest (but could possibly work) were people wearing masks or buying special reflecting paint for their license plates that result in unclear pictures. This may be going to the extreme in my opinion, but people do strange things to avoid getting caught.

At the end of the day the best way to avoid a speeding ticket is not to speed. But it also pays to be aware of where speeding camera’s are placed and by law states that use these devices have to let motorist know where they are located.

Have you got a speeding ticket via an automated speeding camera? Did you find a way to get out of paying the ticket?

Other posts you may enjoy:

~ My shiny new iPhone and why I bought Apple
~ Save $29 in minutes
~ Scams, Schemes and Monkeys Everywhere
~ Falling For a $4000 Debit Card Scam
~ Foreclosure Rescue Scams – Coming to your Neighborhood