The Washington Post had two graphics that neatly summarize the impacts from the fiscal cliff. This is the number one topic in the world of finance and almost all Americans will be impacted by the potential fallout in some fashion. My opinion is that Congressional Republicans and the Obama administration will reach some form of deal by year-end to avert falling off the so called fiscal cliff. Because if they don’t the potential consequences from the loss of consumer and business confidence could be dire to an already fragile economy.

What is the Fiscal Cliff? It is basically a set of tax hikes and spending cuts that will go into effect if Congress and the re-elected Obama administration don’t compromise and get their act together. If we go over the “fiscal cliff” at the start of 2013, federal income tax rates will return to the higher pre-Bush tax cut era levels (see potential 2013 rates), the FICA payroll tax credit holiday disappears, federal long-term unemployment benefits go away and people who lose their jobs in 2013 will only be entitled to 26 weeks of state unemployment benefits. Medicare reimbursements to doctors will also get cut and because the debt ceiling stays the same the government will be forced into taking sequestration measures which means across-the-board government spending cuts, including a $55 billion (9%) cut to the defense budget.

The graphic below shows how the fiscal cliff tax hikes and expiring tax breaks will impact groups based on their income levels.  As expected, it will affect wealthier Americans differently (and to a larger extent) than lower-income Americans. The Bush-era tax cuts, or 2001-03 low/middle income tax cuts in the graphic, are by far the largest component of the fiscal cliff. 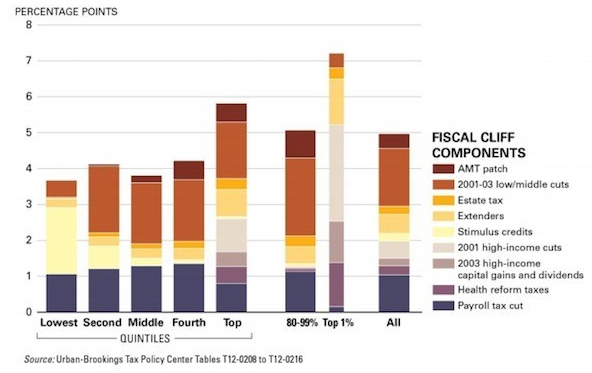 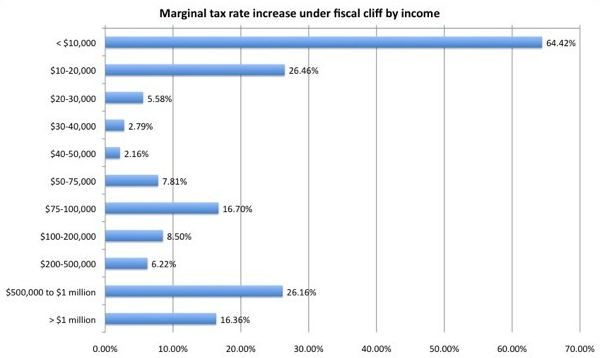 Other good articles from around the web on the fiscal cliff are listed below: