[2013 Small Business Tax Breaks Extensions] Congress and the Obama administration have reached an agreement that will extend a number of small business tax breaks through 2013 following the fiscal cliff deal which was legislated through the Taxpayer Relief Act of 2012. This includes:

R&D credit extended: The Research and Development (R&D) tax credit was extended for another year and reinstated retroactively for 2012 (as it had expired at the end of 2011), though lawmakers stopped short of making it permanent. Employers can now continue to get tax breaks for between roughly 6 percent and 14 percent of their R&D expenditures in 2012 and 2013.

Section 179 continued: Congress renewed for another year the maximum deduction levels for bonus depreciation and Section 179, which give tax breaks to businesses that purchase or lease software and equipment — both provide a boost for small employers planning to invest back into their firms in 2013. The new law extends the maximum deduction to $500,000 for the 2012 and 2013 tax years for companies with under $2 million in qualifying capital expenditures.

Bonus Depreciation. The bonus depreciation provision enables small businesses to recover the costs of qualified new equipment faster than the ordinary schedule, by permitting the depreciation of 50 percent of the cost in the first year. The provision was set to expire at the end of 2012, but has been extended through the end of 2013 (and 2014 for certain types of property).

Employment tax breaks continued: The Work Opportunity Tax Credit (WOTC), a tax incentive for firms that hire widely underemployed groups like youths and veterans, as well as breaks for renewable energy technologies and retail/restaurant improvements were extended through 2013.

Other Small Business Tax Credits. There are a handful of other targeted tax credits that were extended for 2012 and 2013, including: the new markets tax credit for businesses that invest in certain community development entities and other qualified investments; a reduction in the recognition period for S-corporation built-in gains tax; and a reduction in the time from 39 years to 15 over which a business can recover the cost of certain leasehold improvements and restaurant and retail property; among other targeted provision

With the passing of the Bush-era tax cuts and small business jobs act tax provisions, a number of tax laws will come into effect this year. Here is a summary of the key tax changes and how your business and personal income taxes could be affected.

The 2011 corporate tax rates are the same as the last few years as shown in the table below. While the tax rate structure may not look uniform, it does produce an effective flat tax rate of 34% for incomes from $335,000 to $10,000,000, gradually increasing to a rate of 35% on higher taxable incomes. Different corporations and business’ are subject to special tax provisions for which the IRS website should be consulted. Further, corporations are subject to state and local taxes based on the area in which they are incorporated and/or operate. 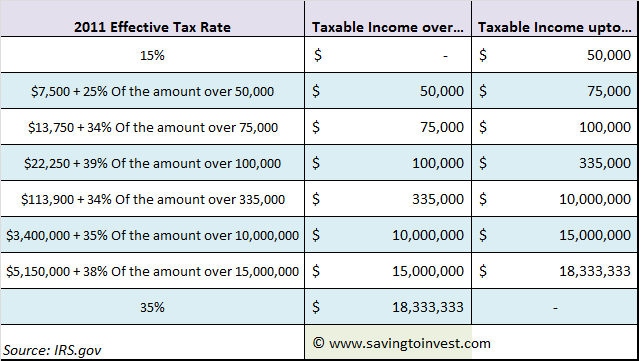 You can find the 2011 personal income taxes here, which are important for small businesses incorporated as sole proprietors, partnerships and S-corps.

Temporary exclusion of 100% of gain on certain small business stock

Under current law, the earliest tax year for which this 100% capital gain exclusion can be claimed is 2015. Additional limitations, qualifications and requirements may apply.

Under the Small Business Jobs Act, if the fifth year of an S Corporation’s recognition period ends before their 2011 taxable year begins, then no tax is imposed on the net recognized built-in gain for the 2011 tax year. Built-in Gains are recognized on Form 1120S Schedule D, Capital Gains and Losses and Built-in Gains. The 2011 Instructions for Schedule D, Form 1120S, will be revised and made available shortly.

An expense deduction is allowed for businesses which choose to treat the cost of certain qualified property, called section 179 property, as an expense rather than a capital expenditure. For qualifying property placed in service during the taxable years 2010 and 2011, the new law increases both the maximum amount of the deductible expense, as well as the statutory phase-out amount. The provision also allows an election by a taxpayer to exclude qualified real property from the definition of IRC Section 179 property.

Generally, small business owners may not deduct the cost of health insurance when calculating self-employment tax. Under the Small Business Jobs Act, and subject to specific statutory limitations (i.e. deduction is not available if self-employed individual is eligible to participate in an employer-subsidized health plan maintained by the employer of the taxpayer or the taxpayer’s spouse), business owners can deduct the cost of health insurance for themselves and their family in the calculation of their 2010 self-employment tax.