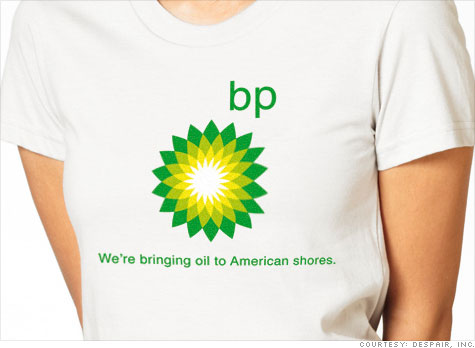 The BP oil spill has been a non-stop news item and most people are probably tired of hearing and reading about this environmental disaster due to corporate negligence.  I am not going to delve into the issue, but it was kind of morbid to read that people and companies are actually making money from this tragedy and government ineptitude. No doubt the affected have been hit hard but a select few are making some serious money (the dark site of capitalism). Here are a few that I have read about. Feel free to leave a comment for any other’s you have heard about. To me, the only redeeming aspect of making money from the disaster is if the benefactors give some or most of it back to the impacted folks.

Oil Spill T-Shirts and Merchandise – One guy sold a 1000 T-shirts at $9.95 a pop on Monday after the oil spill hit national headlines. By now he has probably sold thousands more and raked in a nice fortune. But the competition isn’t far behind with a Google search revealing lots of oil spill related t-shirts and related products now on sale across the Web, taking aim at BP and its “responsibility” pledges. There’s tote bags, buttons/badges and coffee mugs on every e-tail site with a PayPal button. I just hope some of the proceeds are going to a good cause!

Wall Street Fat Cats trading BP and implicated companies stock – Whether stocks go up or down, professional Wall street traders love volatility and can make ton’s of money shorting stocks on the way down. Watching CNBC’s fast money show is a good example of this where some of the traders say “buy”, while the other half say “sell”. My advice is stay far away from BP stock. Much better to give the money you are bound to lose to relief causes and sleep better at night.

Lawyers – BP and it’s sub-contractors are going to be deep in litigation for years to come. First the government is going to get it’s pound of flesh, followed by the many, many plaintiff suits. Estimates range into the billions of dollars in terms of expected payouts. And lawyers will get 30% and more of all the cases they win. Ambulance chasing lawyers have a got a whole new life and I see a new John Grisham book on this topic in the not too distant future.

Google and Adwords – BP and its adversaries are racing to dump a fortune in search advertising dollars into Google’s (GOOG) coffers. It’s all about AdWords, the buying and selling of paid text ads that pop up next to Google search queries. BP and an army of trial law firms have been buying up the right to place ads next to search terms (like oil spill sue) related to the Deepwater Horizon oil spill—terms such as “oil spill sue” and “bp lawsuit.” Search for them, and up pops an invitation to be represented by these firms in forthcoming class-action suits- you may even see some on this site.

Government contractors.  Whether it is a war or any other natural disaster, government contractors seem to be raking in the big bucks thanks to being able to charge astronomical prices for basis services and products. With a government and administration wanting to avoid further negative news on their slow response, they will end up paying these high prices and spending more tax payer money.

Media/Network TV – You cannot watch a national TV network and not see an oil spill update or in-depth coverage. Network TV is loving the non-stop coverage and thanks to advertising are raking in the funds and gaining viewership (away from the internet) to boot!