It also established a $15 minimum wage for covered service and construction contracts. You can see the projected 2022 Monthly Basic Pay charts reflecting the 2.7% raise from January 1st, 2022.

This in in line with higher inflation (see latest COLA adjustment) which meant the overall raise was pretty significant again this year.

Government employees also got a similar pay raise for 2022.

I will publish updated tables next year, including potential 2023 raise, so stay in the loop via the options below.

[Updated following passage of the National Defense act] The 2021 National Defense Authorization Act was passed with a veto proof majority by Congress confirming a 2021 military pay increase of 3.0% in line with latest COLA increase. Updated tables shown below broken up years of service (greater and less than 20 yrs)

2021 Military Pay Chart for GREATER than 20 Yrs of Service

Military staff and troops under the 2020 National Defense Authorization Act (NDAA). This is the largest increase since 2010. The updated basic pay tables reflect this across the board raise and will be effective from January 2020.

[2018 update] In his first year of office President Trump approved a 2.4% pay raise for Military staff and troops under the Fiscal 2018 National Defense Authorization Act (NDAA). This is the largest annual increase service members have received since 2010.The updated basic pay tables reflect this across the board raise effective from January 2018. 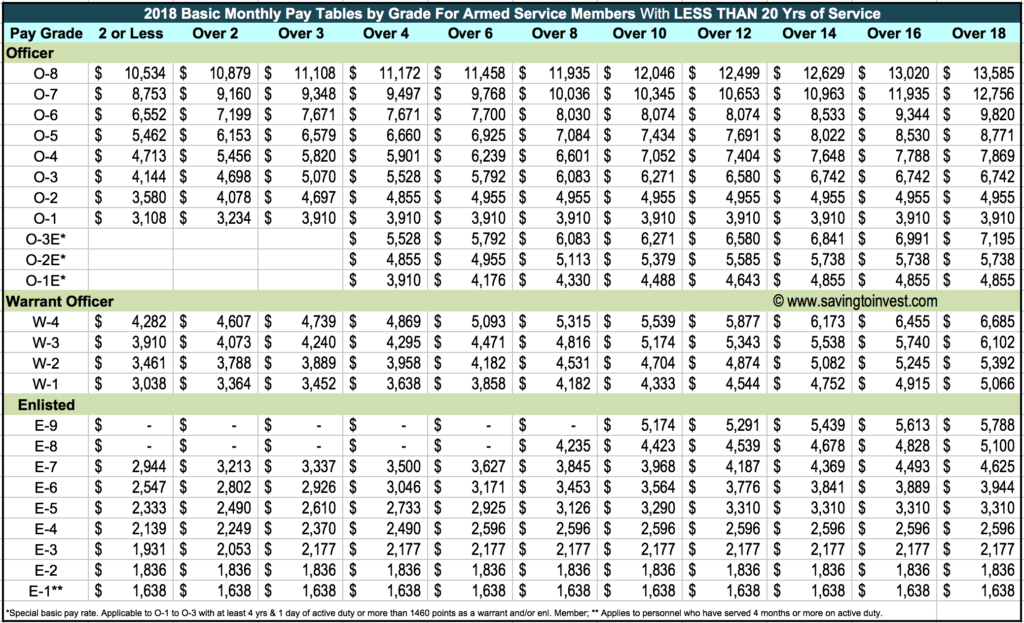 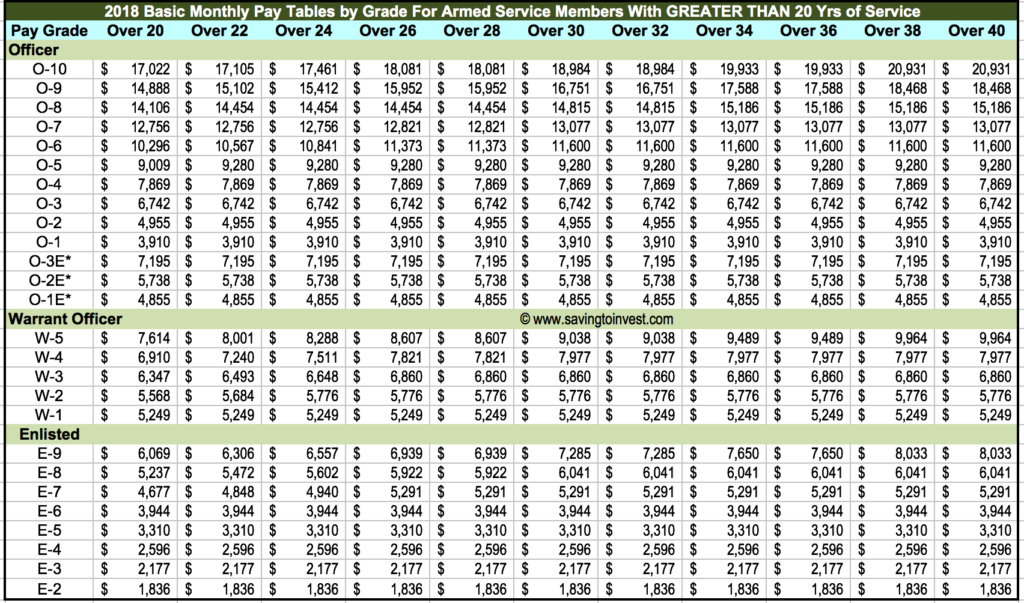 Unlike the relatively large pay raise for troops, the 2018 Basic Allowance for Housing (BAH) only had a modest 0.7% increase (or approximately $10 p/month). This is paid to the nearly 1 million service members living off base in the U.S.

[2017 update] Armed serviced members in 2017 will at minimum see a 2.1 percent increase in base pay following broad Congressional approval of the Defense Authorization bill. Both the House and Senate passed the bill that will be approved by the President. The 2017 raise is 0.5% higher than the original 1.6% approved by the House earlier in the year and was driven by the faster growth in private sector pay as economic conditions improve. The latest raise is reflected in the 2017 basic pay tables below, which are effective January 1st. 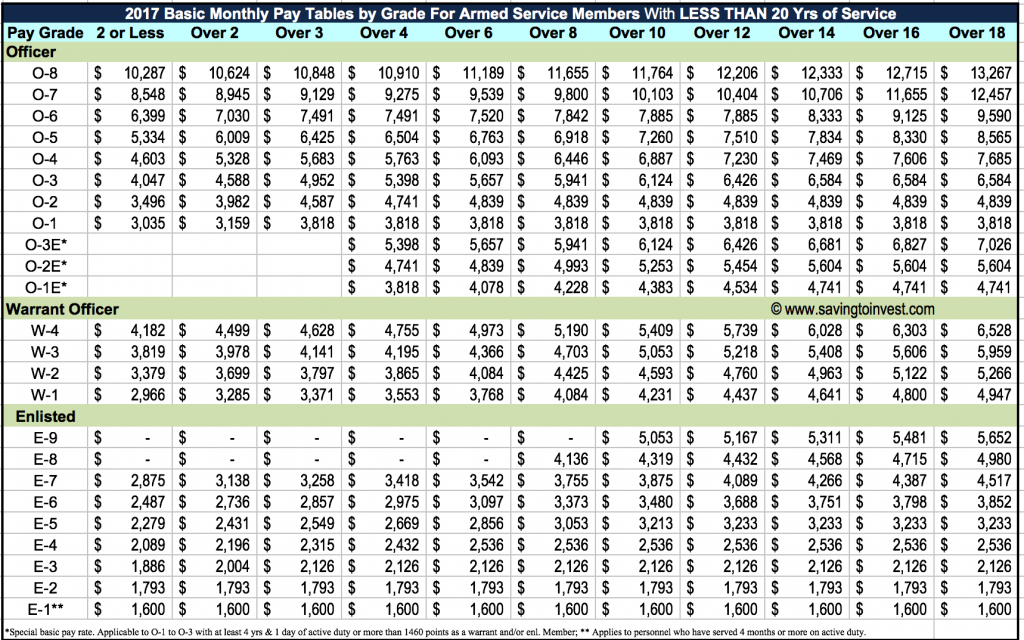 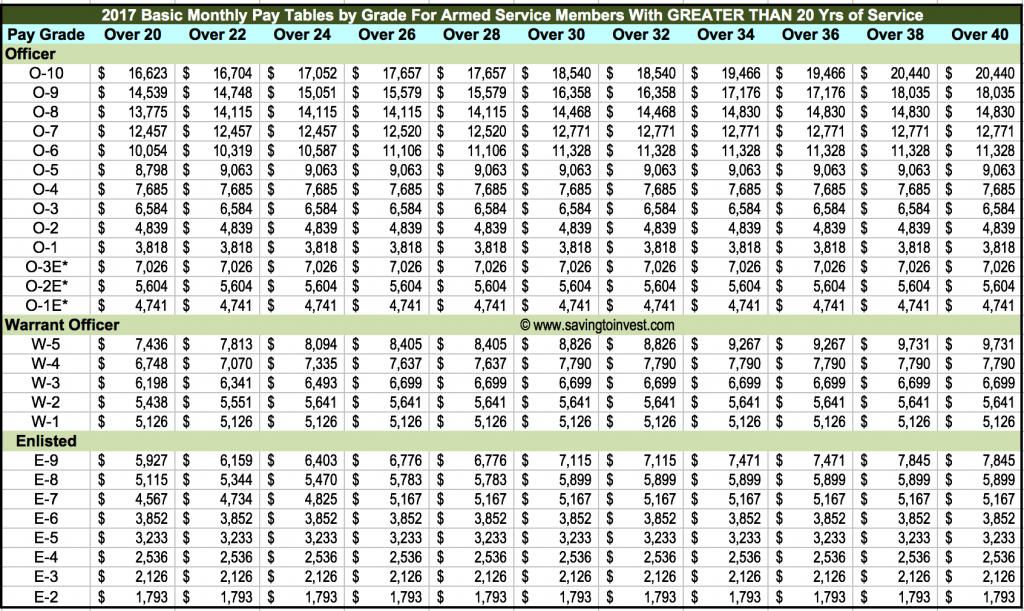 The military pay raise and optimistic economic outlook also prompted a 2.1 percent total raise (1% across the board and 1.2% locality pay) for Federal GS pay scales.
_____________

[2016 updated rates following 1.3% raise] With the powers that be finally reaching a consensus and presidential decree (i.e executive order) likely to come down before year end, our armed services members can expect a 1.3% raise to 2016 basic pay amounts.  This is less than expected but at least better than nothing in a relatively benign inflation environment. Will publish any updates, if applicable, once released by DFAS 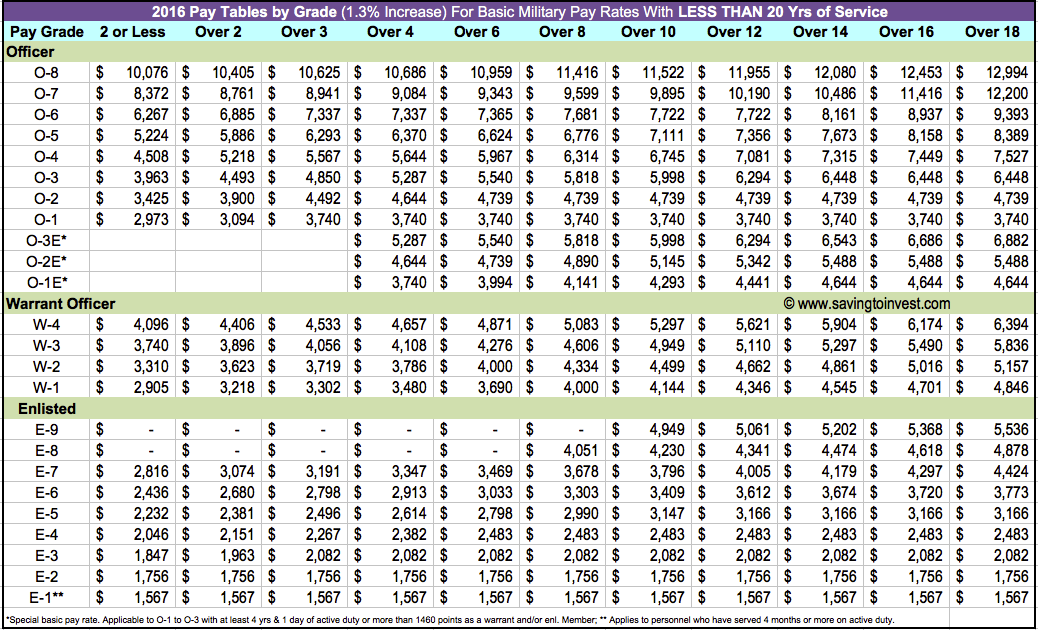 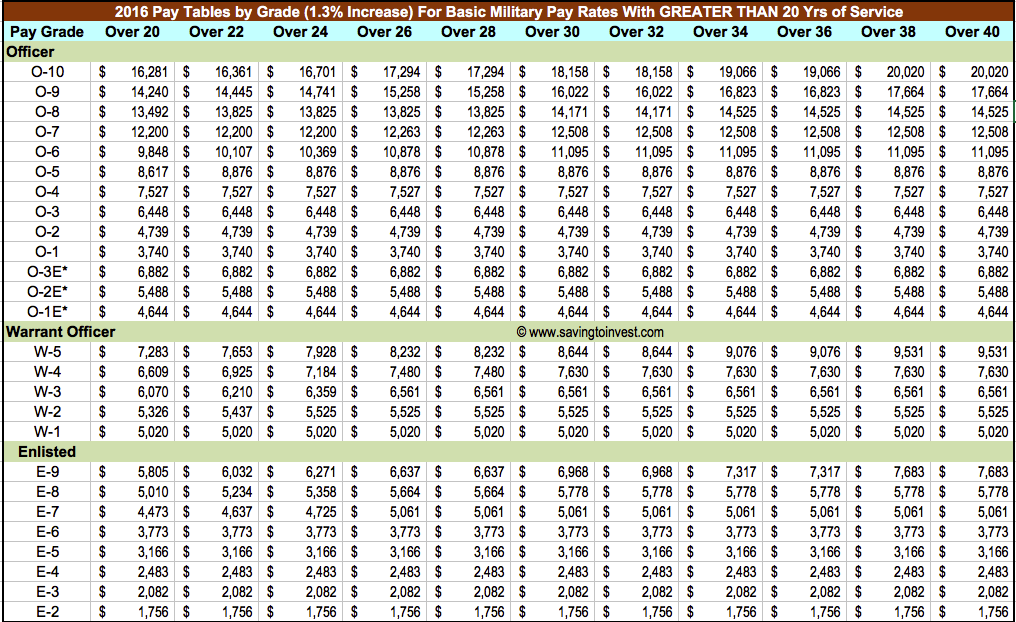 To get the latest news and changes on armed forces pay updates, I encourage you to subscribe (free) via Email or RSS.
_____________

[Updated with 2015 rates following 1% raise] Following the end of year presidential executive order, 2015 military basic pay for most armed services personnel will officially increase by 1 percent effective January 1, 2015. This is in line with the one percent raise last year (see previous update below) and 2015 GS pay raise for federal employees. The tables below show the final 2015 basic pay tables based on pay grade and years of service. 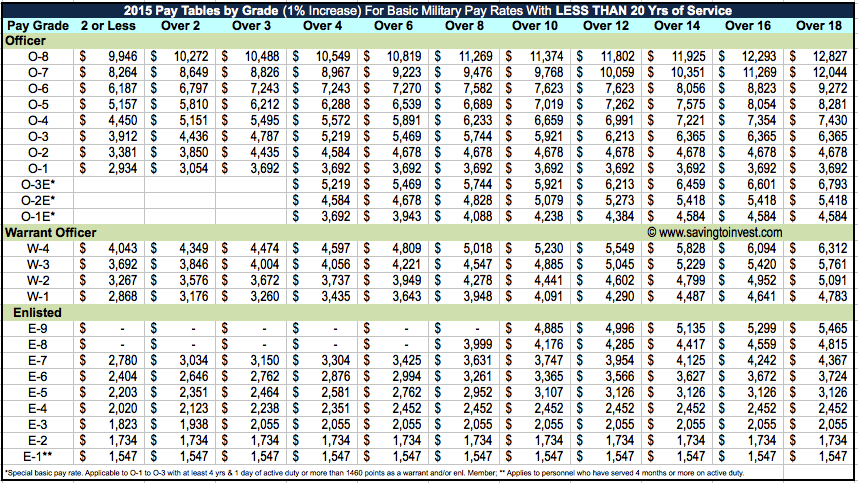 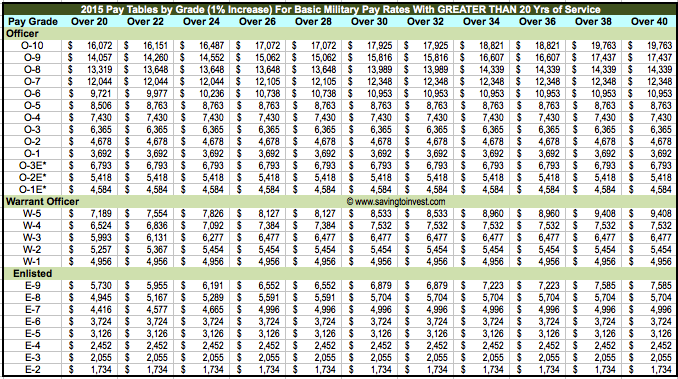 [Updated with 2014 rates] The 2014 military basic pay for armed services personnel will officially increase by 1%, effective January 1, 2014. This is lower than the 1.7% raise last year (see previous update below), but with all the budget cuts it was good to see our armed service members still get a raise. . The tables below show the 2014 basic pay tables based on pay grade and years of experience. 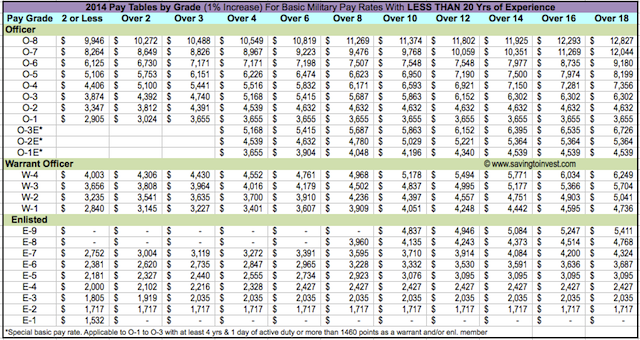 [2013 Military Pay Charts with 1.7 Percent Raise and Basic Housing Allowance (BAH) Increases] Congress has agreed to a military pay raise in 2013 with the the Senate approving legislation that matches House legislation giving active service members a 1.7% basic pay raise in 2013.  This is in line the 2013 COLA increase. Updated 2013 pay charts/tables are shown below for all individuals in the uniformed services. 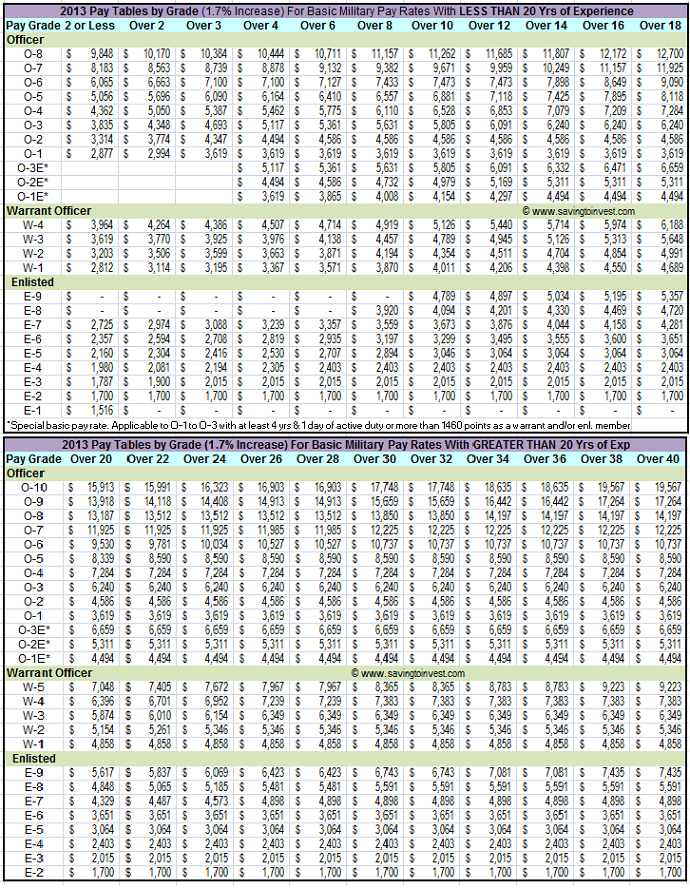 The 1.7% military pay increase is effective from January 1st.