[Updated with 2013 IRS inflation adjusted tax brackets and fiscal cliff changes] Congress and the Obama administration’s fiscal cliff deal (ATRA act) means that 2013 federal tax rates will remain fixed for nearly 99% of the population. Only those earning above $450,000/$400,000 (married/single) AGI will have a higher federal marginal tax rate in 2013, relative to 2012 levels. Below is the official IRS tax table with 2013 tax rates and inflation adjusted tax brackets, reflecting a slight increase over last year.

With all the tax changes resulting from the fiscal cliff legislation and especially because of the payroll tax credit expiry, the Tax Policy Center estimated around 77% of American households would see a tax increase in 2013 compared to their 2012 tax levels. Here are some other tax impacts you will see this year.

[Updated following the re-election of Barack Obama]  What will happen to tax rates in 2013? This is a question that will become a central focus for American tax payers now that the Presidential  election is over. With the Obama-Bush tax cut extensions on income, capital-gains and estate taxes set to expire on Dec. 31 2012, there will be a sharp rise in tax rates for investors and those in higher income brackets during 2013 if these tax breaks are not extended (being referred to as “taxmageddon”). As the first table shows, the top tax rate will return to 39.6%. Long term capital gains would be taxed at 20%, while dividends and short term capital gains would be taxed as ordinary income. 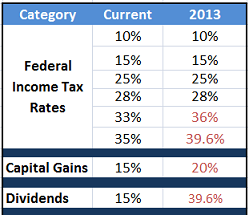 Will 2012 tax rates be extended? In his latest budget proposal and per the official campaign policy, President Obama reiterated that he will not be extending the Bush-era tax cuts that benefit higher income earners (earnings > $250,000). The lapsing of the tax cuts will slash about $4 trillion from the deficit, but will raise effective tax rates for over 20 million American families and small business’. The administration contends that middle class Americans will be unaffected.

President Obama’s healthcare reform will also mean two new taxes (classified as Unearned Income Medicare Contribution Taxes) in 2013. The first is an additional 0.9% levy on top of the 2.9% Medicare tax for those earning more than $200,000, and a new 2.9% surcharge on investment income, including interest income.

Payroll Tax Credit Expiry. A temporary 2% cut in Americans’ payroll taxes, effective in 2011 and 2012, is also likely to expire on December 31st. [See how this will hit your paycheck via this payroll tax credit table]. The payroll tax break or credit dropped an employees payroll withholding rate for social security taxes to 4.2 percent from 6.2 percent, resulting in a potential after tax saving of up to $2000, and affected about 160 million Americans who had an earned income source.

The administration and many law makers are also proposing that investment income for those earning over $1 million be taxed at an average rate of 30% (known as the Buffett-rule proposal).

While there is time to extend federal income tax rates, it is unlikely a lame duck Congress (the new Congress is sworn in on Jan 20th) will make any major tax reform changes. This gives rise to three potential scenarios over the next few months:

– Band aid solution where the tax cuts are extended temporarily for 6 months or so, giving Congress time to act on a permanent solution—possibly by reforming the tax code. However all this will do is to put us back in the same situation as we are in today, just at a later date.

– Some type of compromise could be reached in the lame duck congressional session, with some taxes extended for lower income earners and others allowed to expire.

In any event, the above changes make tax planning to minimize taxes even more important. For example, take income or capital gains in 2012 prior to the 2013 tax increases. Another strategy would be converting a traditional IRA to a Roth IRA, on which you pay taxes now but none at withdrawal when tax rates are higher.