Ever wondered where all our federal tax dollars go? I did and a recent report from the center on budget priorities and policies (CBPP) provided a very nice graphic on how federal tax dollars are distributed. With all the political rhetoric that abounds around the national debt, excessive federal spending and the uncertain future of government safety net programs (like social security and medicare) it is important to have an understanding of where the money goes. Particularly if it informs who you will vote for in the upcoming elections. 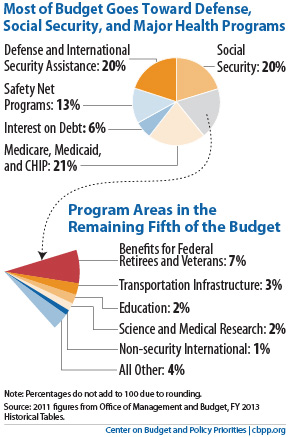 Last year (Fiscal year 2011) the federal government spent $3.6 trillion, amounting to 24%of the nation’s Gross Domestic Product. Of that $3.6 trillion, $2.2 trillion was financed by federal tax revenues (business and personal), and $83 billion by excess profits on assets held by the Federal Reserve. The remaining $1.3 trillion was financed by borrowing, adding to the rising national debt.

Over 60% of federal expenditures went to just three main areas: Defense (20%), Social Security (20%), and government health insurance programs like Medicare/Medicaid and Child Health insurance (21%). Federal aid safety net programs (13%) and interest payments on our national debt (6%), make up the other significant portions of federal spending with the remaining 20% classified as discretionary spending and covers items such as transportation, education and infrastructure.

Over the last few years there has been a significant spike in federal aid programs (discretionary spending) like the American Recovery and Reinvestment act of 2008 enacted by President Obama to combat the recession. But the bigger issue facing America is not what the spending and associated national debt are today, but rather what things will look like in 10 years if projected spending and revenue patterns are maintained. According to the Congressional Budget Office, by 2020 interest payments to service the national debt will continue to garner a significantly larger portion of federal spending.  Social security and health care spending will also increase significantly reflecting the aging American population.

It is clear that if current spending patterns continue, America will not address its debt and deficit problems as evidenced by higher interest payments. Cuts to discretionary spending will do little in the bigger scheme of things to control our budget deficits. The main programs like Social security and Medicare/Medicaid need to be addressed, and most importantly the national debt needs to be brought under control. 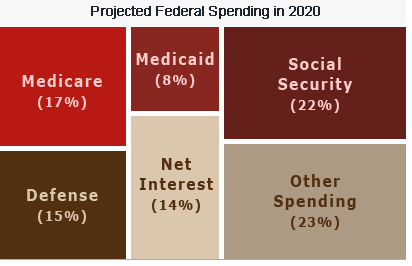