President Obama and Congress have approved a two year extension to all the Bush-era tax cuts. This means that the 2011 Federal IRS tax rates will be the same as 2010 rates, shown in the table below. However tax bracket ranges and standard deduction levels have increased slightly. A rise in tax rates would have cut the after-tax pay by $3,000 for the average tax payer, so the extension is worth a lot given current economic conditions. However, the extension is only for 2 years and unless the economy really tanks, don’t look for tax breaks to be extended again in 2013.

I will continue to provide updated tax information when released by the IRS and encourage you to subscribe (free) via Email, Facebook or Twitter to get the latest news.

[Previous Update- Sep 2010] With tax season complete, it is now time to look forward and implement some smart tax management strategies to reduce your mitigate your tax liability for the years ahead. This is particularly the case with a number of new provisions and expiring tax breaks in 2010 and 2011. Based on these and extrapolating from 2010 IRS Tax Brackets I have provided my preliminary view of the 2011 income tax brackets.

Beginning in 2011, tax rates that were in effect prior to 2001 and 2003 will be restored if President Obama does not extend the Bush tax cuts. These tax cuts included reductions in some individual income-tax rates, levies on capital gains and dividends, changes to the estate tax and relief from the so- called marriage penalty, in which a married couple may pay more in taxes than if they filed as separate individuals. The top income tax rate would go back to 39.6 percent, and the special low 10 percent bracket is eliminated.

Whether this actually happens will be a major point of contention in Congress especially in the contradictory light of the recession and record federal deficits. In all likelihood and based on stated views, it is likely that the Obama administration and Democratic lawmakers will extend income-tax cuts that benefit American families earning less than $250,000 a year, while allowing tax rate reductions for high-income earners to lapse. This means boosts in the top marginal rates from 33% and 35% to 36% and 39.6% respectively. Based on this and inflation, here is what the 2011 tax tables* could look like, with a comparison to the 2010 tax brackets. [SEE THE OFFICIAL IRS TAX TABLE and RATES IN THE LATEST UPDATE ABOVE]

Some of the other key new and expiring tax provisions that you need to be aware of and mange include:

Increase in Capital Gains and Dividend Tax Rates – This is going to affect a number of Americans who saw their portfolio’s battered in 2008-2009. With the recovery in the last 6 months, it looks like Uncle Sam may come a calling for some of those stock market profits with tax rate reductions for long-term capital gains and dividends expiring this year. In 2011, the maximum long-term capital gains tax rate goes back up to 20 percent from 15 percent. A lower 10 percent tax rate is used by individuals who are in the 15 percent tax bracket. Their long-term capital gains had been tax-free since 2008. In 2011, dividend income (other than capital gain distributions from mutual funds) is taxed as ordinary income at your highest marginal tax rate.

Estate Tax Revived – For individuals dying after 2010, the federal estate tax returns with a $1,000,000 exemption and a 50 percent maximum rate. Congress is likely to take some action on these rules during 2010 with a likely exemption of at least $3.5 million, and it could be set as high as $5 million if the Senate prevails. Estate tax legislation will include spousal transfers, making the exemption $7 million or more for couples. The estate tax rate will be capped at 45%, the same as it is now. While there are likely to be more exemptions for the alternative minimum tax, there will be no repeal.

Child Tax Credit – The credit of $1,000 per eligible child reverts to $500 after 2010. After 2010, none of the child tax credit will be refundable to taxpayers unless their earned income is more than $12,550. This is one of the many Bush tax cuts currently scheduled to expire after 2010. Further temporary increases in the Earned Income Tax Credit for filers with three or more children and the higher income levels for the phaseout of the credit are repealed.

Despite a rising tax environment there are some ways to preparing for the upcoming income tax changes. Here are some smart tax strategies to consider:

– Maximize retirement-plan contributions. You should always consider your retirement accounts in any assessment of your tax strategy. When rates rise, tax-deductible contributions and tax-deferred investment growth can become more valuable. Although it’s true that tax deductions will be worth even more if tax rates move higher, there’s no need to postpone them; it still makes sense to continue making the maximum retirement-plan contribution each year. Self-employed taxpayers in particular can set aside substantial sums annually in Keogh or simplified employee pension (SEP) accounts, with contribution limits of $49,000 for 2009. Taxes on those funds will be deferred until they are withdrawn during retirement.

– Consider Roth IRA Conversions – Starting in 2010, individuals with any amount of modified Adjusted Gross Income are free to switch a traditional IRA to a Roth IRA. Conversions are fully taxable at your regular tax rate. For conversions in 2010, taxpayers can spread the tax due over two years. Half the tax will be due in 2011, and the remaining half will be payable in 2012. Removing the limit on conversions effectively eliminates the income limit on contributions to Roth IRAs. A taxpayer with income too high to use a Roth will be able to contribute to a traditional IRA (which does not have income limits for contributions) and immediately convert to a Roth.

– Accelerate income; postpone deductions. Traditionally, the sensible move for most taxpayers has been to take deductions as soon as possible while seeking to delay some taxable income till the following year. However, you may want to consider reversing that formula, accelerating income into 2009 so that it may be taxed at lower rates. A similar strategy might be employed on the deduction side. If you were planning large charitable contributions in December, for example, you could postpone them a month on the premise that if tax rates rise, the value of philanthropic donations as a means of offsetting income will be greater.

– Making work pay tax cut relief (aka Payroll Tax Credit) – The Making work pay tax credit provides $400 for individuals and $800 for couples, phasing out completely at $190,000 for couples filing jointly and $95,000 for single filers. Because the credit is refundable (people can get it even if they owe no tax), most low-income workers will also qualify for the full credit. The average worker will see this tax credit in the form of a $10 and $20 pay rise per year based on their tax rate. Under the 10 year Obama budget, this credit is set to be extended to 2013. For more stimulus credits in 2010 and 2011 see this article.

It is unlikely that raising taxes alone will solve the massive debt and budget shortfalls. A study conducted at the Tax Policy Center found that Washington would have to raise taxes by almost 40 percent to reduce – not eliminate, just reduce – the deficit to 3 percent of our GDP, the 2015 goal the Obama administration set in its 2011 budget. That tax boost would mean the lowest income tax rate would jump from 10 to nearly 14 percent, and the top rate from 35 to 48 percent. What if we raised taxes only on families with couples making more than $250,000 a year and on individuals making more than $200,000? The top two income tax rates would have to more than double, with the top rate hitting almost 77 percent, to get the deficit down to 3 percent of GDP. Such dramatic tax increases are politically untenable and still wouldn’t come close to eliminating the deficit.

Still tax increases in some form or the other are inevitable and the best you can do is prepare for them when then come.

[Update – Jun 2010] Based on recent reports, it is looking more than likely that the tax brackets will remain the same for those earning less than $250,000. Based on this, here is an updated graphic with the possible tax changes next year. 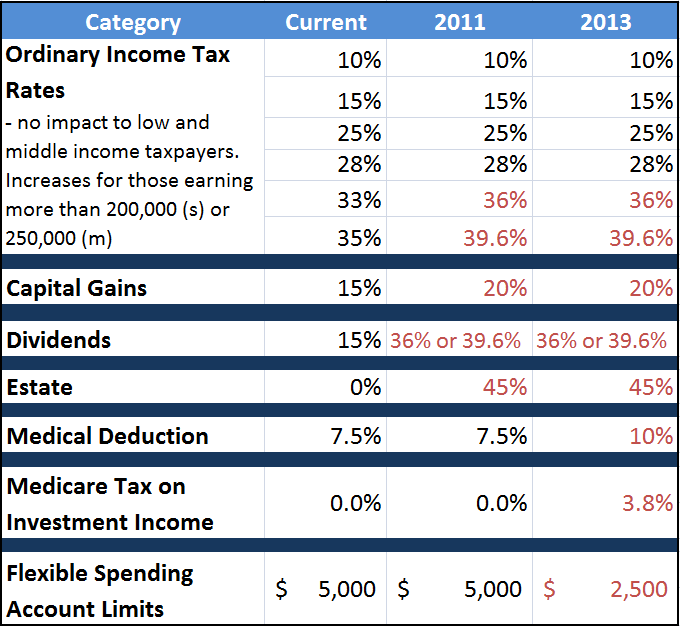 – The tax savings from the wider 28 percent bracket would fully compensate for the rate increases for couples with taxable income up to $270,533 and single filers with income up to $224,000, giving those taxpayers a net tax cut