Given all the tax reforms being proposed under the Trump administration, many Americans are understandably wondering if they will be paying more or less in taxes next year. The answer is that if the GOP tax reform plans are passed, which are highly likely at this stage, then a lot of people will see lower tax effective tax rates in 2018 given increased in tax bracket income thresholds. If they don’t pass the then the published 2018 IRS tax brackets shown below will be in effect.

House Republicans have released their detailed tax proposals and here is their 2018 tax table reflecting a consolidation of tax rates/brackets from seven to four (excluding 0% rate covered by the standard deduction). Note that 2018 IRS tax brackets (shown above) should be used for comparison as it is unlikely these new rates will be in effect for 2017 (filed in 2018):

The standard deduction nearly doubles under the GOP/Trump plan, but the personal exemption and several itemized deductions have been reduced or eliminated. As further updates for 2018 come to light with new legislation, I will update the above table and related articles. 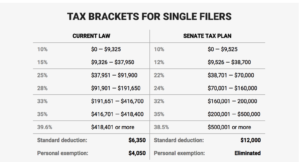 Connect via Facebook or Twitter to get the latest updates and news related to Trump and GOP tax reform proposals.