Congress and the Obama administration’s fiscal cliff deal means that 2013 federal tax rates will remain fixed for nearly 99% of the population. Only those earning $450,000/$400,000 (married/single) AGI will have a higher marginal tax rate in 2013, relative to 2012 levels. Below are the likely 2013 tax rates and inflation adjusted tax brackets (a slight increase over last year) from the Tax Foundation.

With all the tax changes resulting from the fiscal cliff legislation and especially because of the payroll tax credit expiry, the Tax Policy Center estimated around 77% of American households would see a tax increase in 2013 compared to their 2012 tax levels. Here are some other tax impacts your could see in 2013.

The IRS will publish final tax tables and other 2013 tax changes soon and I will be publishing updates and new articles covering these changes. Get these directly via RSS, Email, Facebook or Twitter when published. 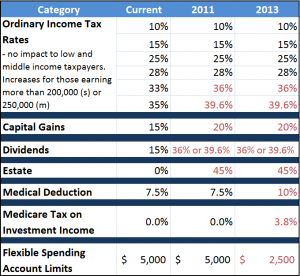 [Update September 2012] While Democrats and Republicans alike want to keep the 2001 and 2003 tax reductions for families earning up to $250,000, President Barack Obama and congressional Democrats want to end the break for those who earn more. Republicans, contending a recovery from recession is no time to raise taxes, insist on continuing the Bush-era cuts for high-income people as well.  However, with more than 75% of national spending devoted to Medicare, Social Security, Defense and other mandatory programs, shrinking the huge federal deficit would require the cutting of all other discretionary outlay programs covering education, health care etc, that millions of Americans rely on.  Politically and practically this means that cost cutting alone cannot solve the deficit problem, which means the government is going to have raise taxes. According to a recent Barron’s review (subscription required), here are just a few of the possible tax changes over the next few years:

Federal Income Tax Rate Changes – Congress is set to debate new tax rates later this year ahead of the Bush tax cuts expiration in 2011. It is unlikely that Congress will let all the tax break’s lapse and will most likely settle on President Obama’s 2011 Budget tax proposals that extends the tax breaks for those earning less than $250,000 (married) or $200,000 (single).  This will result in an increase in the tax rates for only the top 2 tiers, which would rise to 36% and 39.6%, as shown in the table. Folks, in those brackets also would see their capital gains tax rate go up to 20% and dividends taxed as ordinary income as the associated Bush tax cuts lapse. The cost of continuing the tax cuts for the most prosperous Americans would be about $55 billion per year, which is hard to justify given the already massive national debt.

Most people, or 95% as claimed by the Obama administration, would see no change to their federal income tax rates. In fact their effective tax rates may actually be lower than they are now thanks largely to the $400/$800  making work pay tax credit which is being extended until 2013 under Obama’s 2011 budget proposals. Though, like all other spending measures in Congress, the future funding of this credit is by no means guaranteed.

The average tax rate for the 400 richest U.S. households fell to 16.6 percent in 2007 from 29.4 percent in 1993. There are about 5 million households earning more than $250,000 a year. By contrast, the Tax Policy Center found in April that 47 percent of Americans pay no income tax, largely the result of tax credits enacted under Bush and Obama. Those Americans do pay Social Security and Medicare payroll taxes.

There are also a number of tax increases in the recently approved health care reform to help pay for some of the new provisions. This includes a new Medicare tax on investment income and an additional 0.9% Medicare payroll tax for higher income earners on top of the 1.45% tax. There are also changes in limits on FSA’s (Flexible Spending Accounts) and a higher threshold on using medical deductions.  Starting in 2013 health care legislation for the first time would place a $2,500 limit on what can be contributed to employer-sponsored flexible spending accounts. The cap will receive annual cost-of-living adjustments. Employers currently set their own limits, typically between $3,000 and $5,000 in the absence of a government cap. This change would cost an average worker about $625 in tax savings Further, medical expenses will have to reach 10% of your adjusted gross income to qualify for a tax deduction, as opposed to today’s 7.5% standard. But seniors age 65 and older would be able to claim an itemized deduction at 7.5% of income through 2016.

All told, 85% of the tax burden under the new health care reform package will be shouldered by the top 1% on income earners, who will see an average increase of $28,500 to their tax bill, according to the Tax policy center.

If you feel that you will or may be hit by higher taxes then consider smart tax minimization strategies such as Roth IRA Conversions. Starting in 2010, individuals with any amount of modified Adjusted Gross Income are free to switch a traditional IRA to a Roth IRA, and spread the conversion tax due over two years. Removing the limit on conversions effectively eliminates the current income limit on contributions to Roth IRAs.  Another strategy is to accelerate income and  postpone deductions. Traditionally, the sensible move for most taxpayers has been to take deductions as soon as possible while seeking to delay some taxable income till the following year. However, you may want to consider reversing that formula, accelerating income (through stock sales or taking an early bonus) into 2010 so that it may be taxed at lower rates. A similar strategy might be employed on the deduction side. If you were planning large charitable contributions later in the year, for example, you could postpone them to early 2011 on the premise that if tax rates rise, the value of philanthropic donations as a means of offsetting income will be greater.

The extent to which the Bush tax cuts are extended will be a key focus in Congress and will have a significant bearing during the midterm elections which will determine who controls Congress and ultimately who makes long-term decisions over taxes. I will continue to follow this issue and encourage you to subscribe (free) via Email or RSS to get the latest updates.

13 thoughts on “Fiscal Cliff Deal and What’s Ahead in 2013 for Taxes on Income, Capital Gains, Dividends and Estates”