See the latest GS Pay table and annual raises here or this article for the latest Armed Services/Military pay chart.

[Updated : 2012 Pay Tables] Following President Obama’s Federal employee pay freeze, 2011 and 2012 GS tables will remain the same as 2010. This includes the special base rates for GS law enforcement officers (GL) at GS grades 3 through 10. Unfortunately this means that the proposed raises discussed in previous updates below will not come to pass in 2011 or 2012, despite COLA increases for other federal benefits. The 2011 and 2012 GS Pay scale is shown below, with rates effective from January 1st: 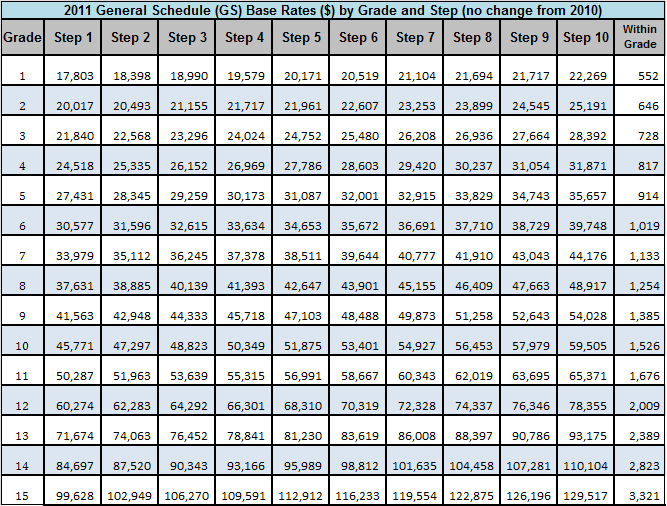 [Dec 2010 – Update on 2011 Federal Pay Raise] In an effort to address growing budget deficit concerns and political pressure, President Obama announced a proposal to freeze federal pay increases. This was against the expected 1.4% raise discussed in the previous update below . This freeze would affect over two million federal government employees, and with inflation set to rise over the next few years the pay freeze essentially amounts to a pay cut for the next two years in real terms.

The freeze applies to all federal workers, including civilian Defense Department employees, but does not apply to military personnel, government contractors, postal workers, members of Congress, Congressional staffers, or federal court judges and workers. The 2011 pay freeze would take effect on Jan. 1, pending Congressional approval by the end of this year. 2012 pay freezes will be proposed as part of fiscal 2012 budget proposals to be unveiled early next year.

“Getting this deficit under control is going to require some broad sacrifices and that sacrifice must be shared by the employees of the federal government,” Obama said in a speech announcing the pay freeze. He added, “I did not reach this decision easily, this is not a line item on a federal ledger, these are people’s lives……Federal employees are hard-working and dedicated and essential to delivering services to the American people. Today [I am] clearly asking them to make a sacrifice.”

USA Today reported this month that the number of federal workers earning $150,000 or more has doubled since Obama took office, fueling public and political outrage over what federal workers are paid

“A federal pay freeze saves peanuts at best,” John Gage, president of the American Federation of Government Employees, said “The American people didn’t vote to stick it to a Veterans Administration nursing assistant making $28,000 a year or a border patrol agent earning $34,000 per year.”

The long-term savings and budget reduction come from lowering the government’s base compensation over the next two years. The administration already has ordered a three-year freeze in non-defense and national security programs in Obama’s budget released Feb. 1, and ordered some agencies to reduce their 2012 budget requests by 5 percent.

The government is projected to spend $457 billion on personnel costs in the 2011 fiscal year, according to the Congressional Research Service. That’s up from $447 billion spent in 2010. Obama made the announcement Monday because Tuesday is the deadline to set federal locality pay, or variations the government makes in pay and benefits based on geographic location.

House Majority Leader Steny Hoyer (D-Md.), whose district is home to thousands of federal workers, said he was pleased Obama instituted only a two-year freeze instead of the three years proposed by the Deficit Commission. But Obama also should have cut pay for some military personnel, Hoyer said in a statement. Obama has already frozen the salaries of top White House officials and top political appointees. But freezing the salaries of all civilian workers is a much bolder step that will result in a big economic hit to the Washington region, which is home to more than 600,000 federal workers and their families.

Republican lawmakers, who support the pay freeze, have already introduced several proposals to cut federal pay and benefits and curtail the size of the federal workforce, including cuts to the government payroll through attrition or firing federal workers who fail to pay taxes.

I will continue to provide updates and the latest federal pay tables as new information is made available. I encourage you to subscribe (free) via Email or RSS to get the latest information.

[Previous Update] How much do federal employees get paid and what will be their congressionally mandated pay raise this year? The answer to this question directly affects millions of federally employed Americans and their families, who are paid based on the General or Executive Schedule. The more common General schedule (GS) has 15 grades and 10 steps in each grade, and covers more than 400 occupations. Earlier this year, the Senate Appropriations Committee passed the Fiscal 2011 Financial Services and General Government spending bill which included a 1.4% 2011 pay raise. This is lower than the 2% raise in 2010, primarily due to the struggling economy and low inflation environment.
The proposed 2011 federal pay raise was in line with President Obama’s budget request for 2011 civilian and military pay scale increases. Current law requires a two-part GS pay adjustment in January each year with pay adjustments based on surveys conducted by the U.S. Bureau of Labor Statistics (BLS). See this article for details on the 2011 military basic pay rates, which are likely to increase by the same amount as civilian pay rates.

Under the terms of the Federal Employees’ Pay Comparability Act of 1990 (P.L. 101-509), pay for civilian federal employees is adjusted each year to keep the salaries of federal workers competitive with comparable occupations in the private sector. The annual increases in federal employee pay are based on changes in the cash compensation paid to workers in the private sector, as measured by the ECI. Under certain circumstances, the President may limit the annual increase in federal pay by executive order. Federal law also requires Social Security benefits and the pensions paid to retired federal employees to be adjusted for inflation each year. The COLAs for both Social Security and civil service pensions are based on the rate of inflation as measured by the CPI (more on 2011 COLA adjustment)

The Act also established a two-step system for setting and adjusting federal pay. Step one is an annual increase that applies uniformly to all “white collar” federal civil service employees covered by the general schedule (GS) pay system, the foreign service pay system, and certain pay systems for employees of the Department of Veterans Affairs. The second step comprises 31 locality-based salary adjustments that vary by geographic area.