While Congressional Republicans were unable to muster the required majorities to pass several versions of House and Senate health care replacement bills, they were able to include a provision to repeal the individual mandate (i.e. the Obamacare penalty) via successfully passing their GOP tax reform bill to support President Trump’s tax reform agenda.

While the Obamacare penalty applied for 2017 and 2018 tax filings (per details and amounts below), for 2019 the Affordable Care Act (ACA) individual mandate provision requiring every eligible American to obtain health insurance or pay financial penalty when filing taxes has been permanently scrapped.

The individual mandate repeal does not mean that Obamacare or the broader ACA is dead – health insurance marketplaces and provisions like coverage for children under 26 are still in place. But it does deal a massive blow to the long term sustainability of ACA as it was based on ensuring enough healthy people buying health insurance (hence the penalty) to offset costs for providing subsidizing insurance to those who could not afford or were ineligible for employer sponsored insurance.

ObamaCare or the Affordable Care Act (ACA), is the law of the land now which means that all Americans with an income above a certain threshold have to purchase or have health insurance. The provision referred to as the individual mandate is what legally required most US citizens and legal residents to obtain private, employer sponsored or public health insurance (through state run exchanges). Based on the most recent data available it is estimated that the majority of the US population gets health insurance through their employers while 50 million people are uninsured. The remaining consumers either buy their own private insurance or are covered by federal/state government programs, such as Medicaid and Medicare.

Here is a summary table of the standard penalties for not having health insurance. Details on how the penalty is applied and individual exemption mandates are provided in subsequent sections.

Individuals: For the 2014 tax year (reported/filed in 2015), individuals who did not have insurance would owed $95, or 1 percent of income, whichever is greater. For the 2015 tax year it rose to the greater of $325 or 2 percent of income. But the penalty for 2016 rose yet again, reaching $695, or 2.5 percent of income, whichever is greater. From 2017, the minimum tax penalty per person will rise each year with inflation. Estimates are provided on the table above and it is likely 2017 penalties and maximums will remain the same as 2016 given the low inflation environment. And for children 18 and under, the minimum per-person tax is half of that for adults ($47.50).  The tax penalty is pro-rated, so that a person who is not covered for only a single month would pay 1/12th of the tax that would be due for the full year.

Individuals or families who fall below income-tax filing thresholds would not owe anything or get subsides or credits to offset health insurance costs (see section below on Health care premium tax credit). People who are unemployed or cannot find a policy that costs less than 8% of their modified adjusted gross income would also be exempt from penalties under the individual mandate. On the other hand, to offset the cost of providing insurance to low income households, individuals making more than $200,000 a year and couples earning above $250,000 will get additional health care taxes deducted as payroll taxes. These people are also hit with a 3.8 percent tax on investment income.

Employers: For employers with 50 or more workers could face federal fines for not providing insurance coverage. Several of the other changes would take effect much sooner. For the current and future impacts of health insurance on employers see this article.

Do I still have to pay the no coverage (individual mandate) penalty with Trump/GOP bill to repeal Obamacare?

President Donald Trump along with Congressional Republicans have started the process to repeal Obamacare in 2017 via the American Health Care Act (ACHA). The challenge they are current facing is that their still isn’t broad consensus for this Obamacare replacement plan and implementing a full replacement will take months, if not years. Without an effective replacement plan an ACA repeal could leave millions without access to health insurance and create significant financial turmoil within the American healthcare system. From a health care penalty perspective, there is the strong expectation that the individual mandate will be removed from 2018 if the ACHA bill is passed (changes may be retroactive). This means that those without health insurance in 2017 may only be subject to a partial or no penalty when filing taxes in 2018.

Note however that President Trump has signed an earlier Executive order that directed federal agencies to to waive or exempt health law-related provisions that would impose costs or penalties on individuals, to the extent permitted by law. But this “hardship clause” does not mean that taxpayers should NOT pay the penalty or delay filing ahead of any formal repeal law.

How Individual Health Care Coverage Will be Monitored

Employers have had to state the value of the health care benefits provided to each employee on their W-2 at the end of each year. Insurers (including employers who self-insure) that provide minimum essential coverage to any individual during a calendar year will also have to report certain health insurance coverage information to both the covered individual and the IRS. Thus, the IRS will ultimately be responsible for reporting an individuals and business’ non-compliance with purchasing health insurance.

A number of tax payers will have more complicated tax returns this year with the need to account for health insurance coverage as part of the individual mandate of the new Affordable health care laws.

Taxpayers who get their health insurance through their employer or government sponsored programs like Medicare or Medicaid, which will be the majority, will be able to prove their compliance via their tax filing by check a box on their normal tax (1040 series) return validating they had insurance. But those who bought insurance on the health insurance exchanges with the help of federal subsidies (see below for income qualification levels) will receive a form 1095-A detailed their coverage and have to reconcile their payments with their income level.  HealthCare.gov, the federal exchange that serves 37 states, started to mail out 1095-A forms to customers said all forms should be mailed out by the end of January. This end of month deadline is also the same for state-run exchanges

Those who failed to report raises or bonuses to their respective health exchanges may have to pay back some amount of subsidy for purchasing health insurance via these exchanges. This may require them to complete additional forms (Form 8965 or 8962) to claim exemptions and determine the allowed premium tax credit. 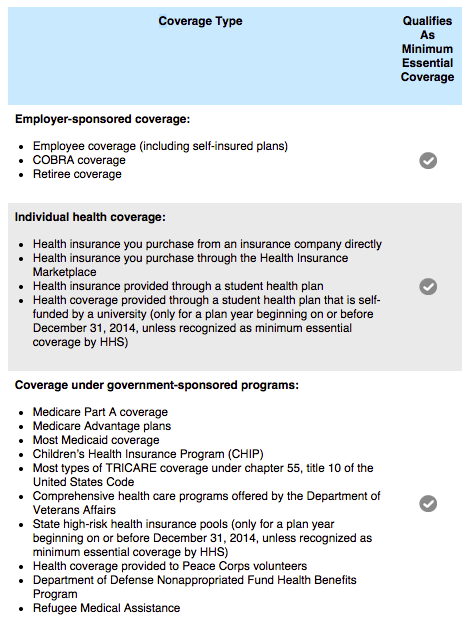 The IRS has provided details on what constitutes coverage under the new health care laws. If you meet this coverage you won’t face penalties.

But you will need to show evidence for these in your tax return (Form 8965) with your tax return.  when claiming the exemption and the IRS will be checking these quite thoroughly.

US citizens or residents who reside overseas and meet the IRS foreign residency criteria (generally 330 full days outside of the U.S. during a 12-month period) can also claim exemption from the individual mandate penalty via Form 8965.  If living overseas for a partial period of time that does not qualify you as a foreign resident for tax purposes coverage provided by your local employer (under an expatriate health plan) can count as qualified health coverage that precludes them from the penalty. One exemption that may be particularly relevant to U.S. citizens living abroad for a small part of a year is the exemption for a short coverage gap. This exemption provides that no shared responsibility payment will be due for a once-per-year gap in coverage that lasts less than three months.

Lower income Americans that purchase health insurance under the Affordable Care Act may also be eligible for a premium tax credit or subsidy. This is paid in the form of a tax credit (in advance or when filing your tax return) and is based on household size and income relative to the federal poverty levels (FPL). To qualify for the premium tax credit the household modified adjusted gross income (MAGI) has to be between 100% and 400% of the FPL. This is shown in the table below for different household sizes. The actual amount of the tax credit will vary based income and household size, but can only be claimed if you purchase health insurance through a healthcare marketplace or exchange.

Note: FPLs are higher in Alaska and Hawaii than in the mainland 48 states. The above limits increase with inflation every year. Eligibility for the subsidy/tax credit is based on income limits for the prior year (e.g your 2017 subsidy is based on your 2016 income levels).