[Update] – The Obama administration announced that it will give Americans who buy health insurance through the new online marketplaces an extra six weeks (until March 31st, the end of open enrollment) to obtain coverage before they incur a penalty.

With all the news around the glitches plaguing the Obamacare website – healthcare.gov – and its links to the online health insurance marketplace, many are wondering if the individual mandate in the Affordable Care Act (the legal name for Obamacare) requiring individuals to buy healthcare will be delayed or extended so that uninsured individuals don’t face a penalty in 2014.

“Millions of Americans have spent countless hours in frustration trying to use the federal Web site, healthcare.gov, and its extensive problems have become a political crisis for the administration, providing new opportunities for Republicans who want to roll back the health care law.” (NY TIMES) 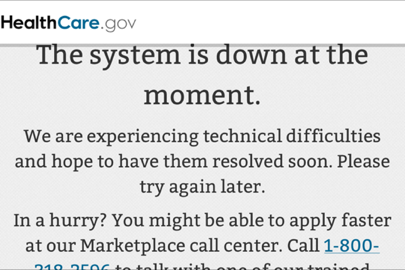 In fact Republican Senator Marco Rubio, a potential 2016 Presidential candidate, is using the latest website glitches to drive his party’s political agenda in repealing Obamacare and has announced plans to introduce legislation that would delay the health law’s individual mandate until the website’s technical failures are addressed. He is pushing for criteria requiring that the website be running smoothly and effectively working for six consecutive months. Many skeptics (all Democrats) of the Senator’s provision are pushing back that the technical failures should not detract from the underlying current and future benefits of the health care law.

President Obama acknowledged the website’s technical issues which he described as “kinks in the system.” To address and solve the issues he promised a “tech surge” by employing top technology talent to resolve the various glitches preventing people from enrolling in a health insurance plan via the health insurance website. Though many IT experts argue that throwing more new people at the problem will hurt rather than help teams trying to resolve the issues.

At this stage the President is standing firm on his signature law’s individual mandate requiring broad based health insurance coverage for Americans in 2014. But if the issues persist past mid-December, it will be hard to enforce the 2014 penalties for those who cannot get insurance because of government driven technical website issues.