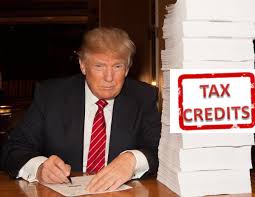 With Donald J. Trump now America’s 45th president many are now asking if he can bring around the economic change promised while on the campaign trail. A lot of people voted for him as a change agent and from an economic point of view at least are hoping he can bring back opportunity to millions of Americans displaced over the last decade following the 2008 financial crisis/recession and ongoing automation and offshoring of American jobs. President Obama did enact a large economic stimulus at the start of his Presidency to keep America puttering along following the Global financial crisis, but Americans maybe looking for even more under Trump and a Republican controlled Congress.

Here are some ideas being floated around from Trump’s official campaign proposals and I will update as more information comes to hand over the next few months. If any of these proposals do come to pass and are enacted by Congress, you will start seeing them towards the second half of 2017 and into 2018.

Infrastructure spending :  Trump has proposed a major boost – up to the tune of $1 Trillion over 10 years – in government spending on infrastructure construction and modernization projects covering roads, railways and airports. Because he is likely to face significant opposition from his own party with all this government spending (which will balloon the already massive national debt) he is proposing to use equity financing where private investors or companies put in the funding for these infrastructure projects in exchange for tax credits. Trump’s plan anticipates the cost of providing these equity tax credits would be recouped through new income-tax revenue from workers and organizations involved in these projects. Though there are a lot of assumptions and no formal numbers to back this up.

Health Insurance Tax Credits:  Trump and the house GOP have announced legislation – the American Health Care Act (ACHA) – to repeal and replace ObamaCare. It includes additional tax credits to offset the cost of purchasing health insurance – which won’t be compulsory and the Obamacare penalty will be removed. Refundable health care tax credits will range from $2,000 to $14,000 will be provided based on age, filing status and income levels. For those under 30 the credit would $2,000 a year and increasing steadily to $4,000 for those over 60. For families the credit can be as large as $14,000.These refundable tax credits are subject to annual income limits ($75,000 for individuals and $150,000 for married couples). See this article for more details and HSA account changes under TrumpCare.

Taxes : Trump has promised to simplify the personal and corporate tax code in his tax proposal. He wants to cut down the federal tax code to only have three federal tax rates/brackets versus the seven today. This includes cutting the top personal income tax rate for high income earners to 33% (from 39.6% today). To help lower-income earners he would raise the standard deduction while lowering the benefit of taking itemized deductions. He would propose repealing the alternative minimum tax (AMT) and the estate tax – which again help higher income earners.

2017 Stimulus Check: There have been a lot of rumors that the Trump administration will look to pay out another stimulus check to offset the pain from any border adjustment tax to price hikes, repealing Obamacare and cutting Medicare. This would impact lower income and social security recipients in particular. But to date there has been no official announcement of a 2017 stimulus check, despite some “fake news” articles that this is coming.  If a new economic stimulus check does materialize in the near term, it will be detailed in his tax package and infrastructure spending proposals due to come out in the coming months.

[Update] Based on Trump’s SOU speech to Congress there will be no new stimulus check in 2017. Given the administration’s preference for an increase in Defense spending (by ~$54 billion), they will defer for now the economic stimulus promised during Trump’s presidential campaign.

Dependent Care Savings Accounts (DCSAs) – These tax-free accounts could be established by all tax payers (regardless of income) for their dependents, including unborn children. Annual contributions will be limited to $2,000 (all sources) and when the child reaches 18 can be used for education expenses. Lower income earners will get a 50 percent match on parental contributions of up to $1,000 per year for these households.

Investment: To promote investing Trump would eliminate the 3.8 percent tax on net investment income on people with incomes (MAGI) of over $200,000 for single filers and $250,000 for married filers. The tax rates on long-term capital gains would be kept at the current 0%, 15% and 20%.

Small and Large Business/Corporations : A trump administration would look to cut the corporate business top tax rate to 15%, vs the top rate of 35% today. This will also include a one time 10% repatriation tax to encourage US companies to bring back funds and profits they have parked in overseas countries that have lower corporate tax rates.

21 thoughts on “2017 and 2018 Trump Economic Stimulus, Tax Breaks and Credits for Individuals, Corporations and Investors”